After sliding down pull up to the left and head outside. A new enemy, an Assassin will attack from the left. When he whirls his swords around he’s invulnerable. To defeat him holster your guns until he puts his sword away and then draw them again. This one will drop Uzi Clips.

Take a running jump to grab the other side of the pit and pull up. Head into the crawlway in the opposite corner of the courtyard and make your way down the passage. Use the Hypostyle Key on the lock to open the door to the Great Hall.

Here you’ll come to a series of large interconnected rooms with pillars and debris. You’ll come a cross a number of Assassins as you explore the ground level so you may want to clear the area out first before continuing.

As you enter the first room you’ll be attacked by 2 Assassins. Theres Uzis behind one of the pillars just ahead. There are two exits in the wall on the right leading to the next room.

In this room you’ll notice some hand holds that you can use to monkey swing across to a ledge. There’s a trapdoor that’s currently open. You can actually get onto the ledge without closing the trapdoor if you want to take the quick route. Otherwise you’ll need to pull a Lever in the next room to close the trapdoor. 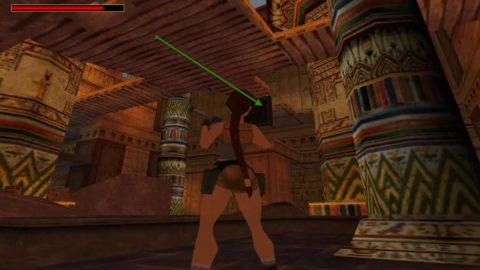 Pick up the Shotgun Shells on a small block just ahead. Continue ahead to the third room (southern-most room) and pick up the Flares. This is the room that has the Lever on the wall that shuts the trapdoor in the middle room. 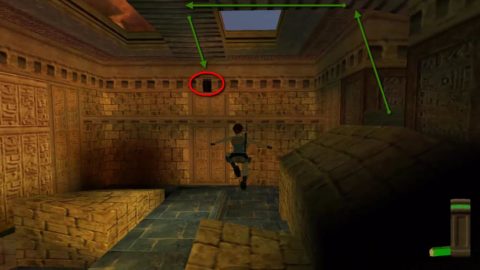 You’ll need to jump up to the ledge from the exit furthest away from the Lever. Face towards the middle room and monkey swing around to the other entrance into the southern room. Jump up to grab the monkey holds and swing across to the Lever. Pull the Lever to close the trapdoor in the middle room, although this isn’t necessary.

Instead you can just monkey swing all the way across to the trapdoor. Go as far as you can, drop down and grab the ledge below. Pull up and Lara will crawl under the trapdoor and stand up on the other side. Run around to the right and pull up to the very highest level. 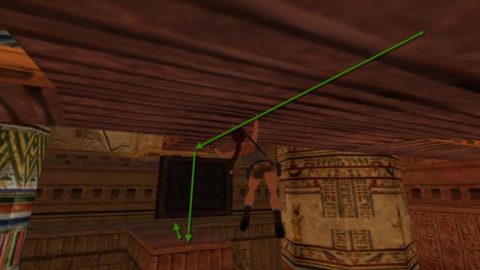 Now jump over the lowered trapdoor and jump around the column. Watch out for the hole in the floor. Continue forwards and then shoot the large Rock off the top of the pillar. 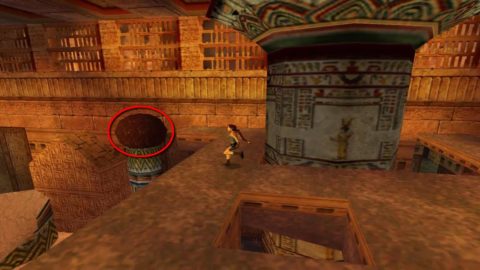 The rock will roll off and smash a large hole in the floor. Drop down and then drop down the hole. Pick up the Uzi Clips in the small passage opposite the rock, crawl back out and then climb up to the exit to the right.

Take the first left into a room with a glowing Pyramid. You’ll notice that three of the walls have openings on the second level opening out towards the Pyramid. There’s also a Rope Pull Chain here but it won’t do anything yet.

Go back the way you came and follow the passage to the left. Jump up to grab the ladder when you come to the hole in the roof and climb up to the top. You’ll see a room with a mechanism above a giant needle. One side of the needle has a red stripe and the other a black strip, just like a compass. There are three rooms like this and all of the needles need to have the red side pointing towards the pyramid.

Leave the way you came and go back to the glowing Pyramid. Pull the Rope Chain which should be working now. The Pyramid will disappear and in it’s place you’ll find a Sun Disk. Pick it up and drop down the hole that opens up on the side of the room opposite the rope chain. Run down the corridor to end the level.

Next: Return to the Sacred Lake