Get out of the Jeep and pick up the Large Medipak and 2 Shotgun Shells (Wide). Hop back into the Jeep using the Ignition Key you found in the last level and follow Von Croy.

Continue throw the short tunnel through the rock and then drive straight ahead to break the supports of the walkway. The Armed Guard will fall down. Quickly turn around and run him over. 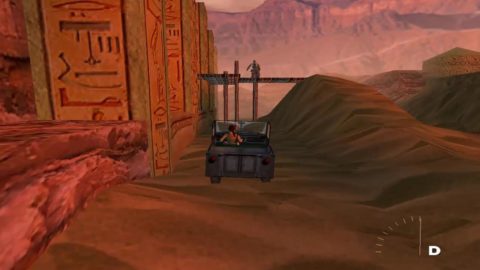 Do a u-turn and head through the gap in the rocks ahead. Take a left turn and run through the supports of the walkway on the left. The Armed Guard will fall down so quickly run him over before he gets a chance to shoot. Park the Jeep and get out.

It’s time to pick up the first secret. Run back out the way you came and go under the arch. Climb up the block to the left and crawl into the small cave for Secret #1 with a Large Medipak. 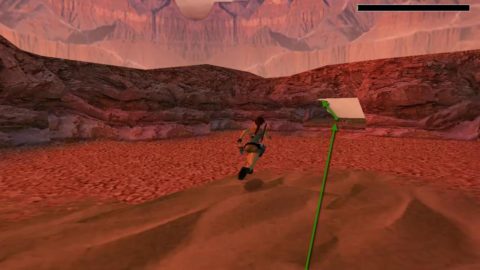 Run back to the buildings and climb up to the walkway just ahead. 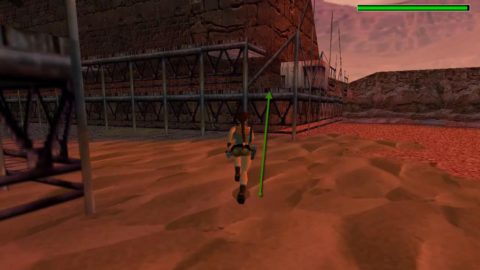 Run back the way you came, climb up and climb back over the white block. Follow the walkway to the right for Shotgun Shells. Go back to the corner and jump up to the top level. About halfway down the walkway will be an alcove in the wall with another Large Medipak.

Turn around and take a running jump to grab onto the Rope. Use it to swing across to the other side. Run to the left and jump up to grab onto the Switch. Lara will pull it down, opening the gate. Drop back down and run through the gate.

There are some raised alcoves ahead. The one to the left of the ramp has a Large Medipak and the one two to the right of the ramp has Uzi Clips. Head back to the Jeep and use the Ignition Key to get inside.

Drive through the gate and up the ramp, avoiding the spiked balls along the way. At the top of the ramp stop the Jeep and get out. Turn around to face the way you came and take a standing jump to grab onto the side of the wall in the hole in the roof. 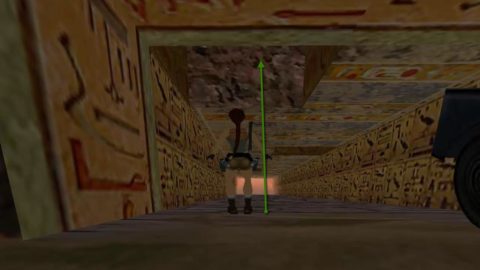 Climb almost to the top and then backflip into Secret #3 with Grenades. Drop down and get back into the Jeep. Follow the path around and stop just before the holes on the left and right.

Get out of the Jeep and climb down the hole on the left. Stay on the left and drop down while grabbing to grab the edge of a small crawlway. This is Secret #4. 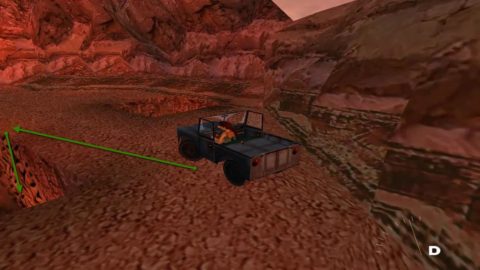 Climb inside for Shotgun Shells (Wide) and turn right at the end to find some Arrows. Climb back out and return to your Jeep.

Follow the path around and then chase Von Croy through the desert. Follow him through the opening to a tunnel to end the level.

Next: Level 7 (Temple of Karnak)