In this level you’ll come face to face with the Guardian of Semerkhet. Drop down the hole which should be just ahead and to the left. Stop as close as you can to the first blade trap and then roll to make it to the other side unscathed. Do the same for the second blade trap and then slide down to the Map Room.

There are two sloped passageways on the left and right wall. The one on the right is too steep so climb up into the passage on the left. Crawl through the tunnel to the right into a room with a raised walkway and a wheel.

Turning the wheel opens a door at the end of the walkway. Turn it a few times so that the door is completely open. You’ll need to run quickly around the walkway. If you stop the blades will slice you so keep running. You can make it to the door more quickly by jumping over the corners. Once you reach the door roll underneath it to the other side. Quickly flip backwards to avoid the spikes on the other side of the door. 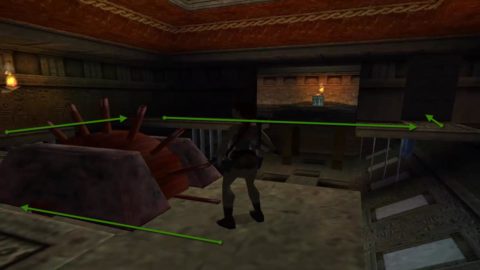 Walk to the back of the pedestal, there are blades on the other 3 sides, and pick up the Golden Vraeus. Drop down to the floor and hop over the shallow pits because some of them have spikes. Climb into the passage at the other side of the room and then climb up the ladder. Jump up the block and crawl through the tunnel. Drop down the other side to end up back at the wheel.

Go back to the Map Room and use the Golden Vraeus on the golden triangle to the right. A light will hover over the map and open the pyramid in the center. Pick up the Guardian Key from the pyramid and use it on the receptacle on the other side of the room. This opens up the trapdoor just to the right. Drop down and slide down the tunnel to a Hallway.

A barred door is down the corridor to the right. You’ll open that up later. For now run to the left and pick up the Small Medipak. Turn around and jump up to grab the handholds on the ceiling. About half way across you’ll be attacked by Bats. It’s best to drop down and kill them before going back and jumping back up to the handholds.

Swing all the way down, past the first passage on the left and drop and grab onto the next crawlway. Crawl through the passage to Secret #1. Drop into the room with the four burners. On the tables you’ll find Shotgun Shells and Explosive Arrows.

Run back to where you picked up the small medipak and follow the hallway around the corner. You’ll notice thumping coming from the doors to the left. Once you run past all the doors the Guardian of Semerkhet should break through one of the doors. If not pull the Lever to release him.

Dodge the Guardian and run through the open doors. Follow the hallway around to a small room with a Small Medipak in the middle. A couple of Bats will attack. Look inside the niche for a Torch.
Run back down the hallway the way you came and light the Torch on the lit torch mounted on the
wall.

Now run back to the small room and use the Torch to light the unlit torches mounted on either side
of the room. This opens a door in once corner. Drop down into the passage for Secret #3. You’re
safe from the Guardian here.

Drop the Torch and follow the passage to a room with three pedestals. Take the items on top from
an angle or Lara will get damaged by the blades that spring up. You’ll find a Large Medipak,
Shotgun Shells and Arrows. A ball with blades will drop down in the middle of the room as you’re
picking up the items.

Head back to the Hallway and follow it around all the way back to the barred door at the very end.
Stand just in front of the door and wait for the Guardian to charge. Jump out of the way just
before he reaches you and hopefully he’ll smash through the doors. Run through the doors and go
down the ramp to a large room. 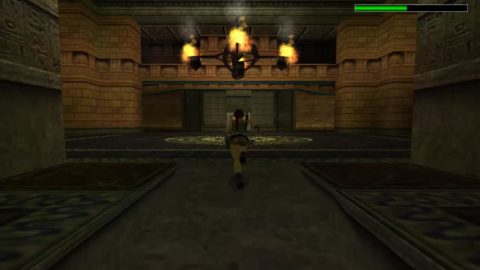 Around the perimeter of this room you’ll notice three plates with eye symbols on them. You need to taunt the Guardian by standing in front of them and make him smash into them. Once all three of them are broken the two doors on either side of one of the eye on the opposite side of the room will open.

First run through the door on the right side of the eye and climb up the ladder. Run up the steps to the ledge overlooking the large room. Run around to the left and enter the passageway in the left wall and enter the room for Shotgun Shells, Uzi Clips and a Small Medipak. Watch out for the spiked ball that drops from the roof.

Leave the room and continue around the ledge until you spot a hole in the roof. Pull up for Secret #3. There are 3 items on pedestals but you can only pick one of them as the other 2 will be set on fire once you choose one. You can select from a Small Medipak, Shotgun Shells or a Large Medipak.

Leave and drop down to the ground. Run through the door on the left and climb up the wide ladder at the end of the passage to end the level.