Drop down to the alley and approach the Wounded Soldier to speak with him. Your objective for this level is to pick up the Nitrous Oxide for your bike and then return to the Soldier. It’s a short but tricky level.

Pick up the Revolver Ammo on the other side of the Soldier and continue down the street. Before long you’ll come across the beast he was talking about, a Dragon! The dragon will shoot fireballs at you but if you stay behind the low wall on the left you’ll be safe. From there you can pick up the Grenades and Small Medipak. 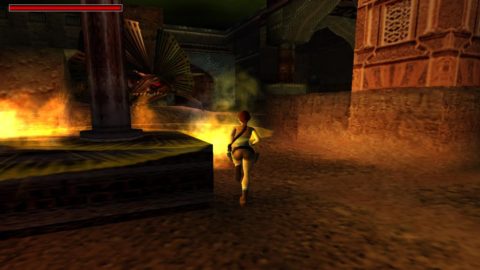 Just as soon as the dragon has released a volley of fireballs sprint past to the other side. Continue running down the street and just as you’re about run under a clothesline you’ll be attacked by Locusts. Keep running until they fly off. Now turn around and run back the way you came. Go through the opening on the left, just past the clothesline.

As you approach the crawlway in the wall 2 Crocodiles will emerge. Kill them and crawl into their hidey hole for Revolver Ammo and Poisoned Arrows. Crawl back out and climb up the break in the wall on your left. Drop down into a courtyard with 2 coffins.

Each of the coffins has a symbol on the top. There are also 4 Switches representing the symbols. Pulling the right switches will move the coffins but you don’t need to figure out which ones because the puzzle doesn’t get reset. You can just pull all the switches to move both coffins. The coffin below the rope opens with Switch 1 and 3. The other coffin opens with Switch 1, 2 and 4. The fourth switch is up on a ledge.

Quickly climb out and go through the door you just opened. Run up the passage and kill the Bats along the way. You’ll release more Locusts as you approach the top but they will disappear when you reach the opening overlooking the courtyard.

Take a running jump to grab onto the rope and slide down to the bottom. Turn around to the left, take a large swing and jump to land on the ledge with the bell . This is the bell that’s to the right of the opening you just came through. You’ll need to line up the swing to be slightly to the left of the bell or you won’t make it. 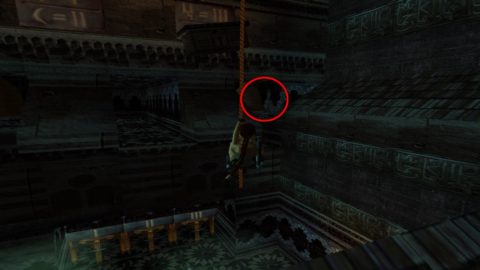 Climb back out and drop down to the courtyard. Run up to the top again. This time you can get rid of the Locusts by saving and reloading your game. Take a running jump to the rope, slide down to the bottom and swing straight across to the square ledge by the building on the other side.

Turn to the right to face the building opposite and take a standing jump to grab onto the ladder. Traverse around the corner to the right and drop down onto the ledge.

Turn left and take a running jump over the beams to grab onto the ledge behind them. Pull up into the crawl space on the right to grab a Small Medipak. Drop back down to the ledge.

Take a standing jump to the awning below diagonally down on the right when facing out across the street. From here take a running jump to grab onto the edge of the passageway in the building at the end of the street.

Run through the passageway and stop when you reach the opening at the other end. Shoot the Bat and then take a running jump from the right corner diagonally across to the right by the upturned truck. You’ll be attacked by 2 Beetles.

Around the other side of the truck you’ll find the Nitrous Oxide Canister. Walk back to the pit and take a running jump to the flat area on the other side. 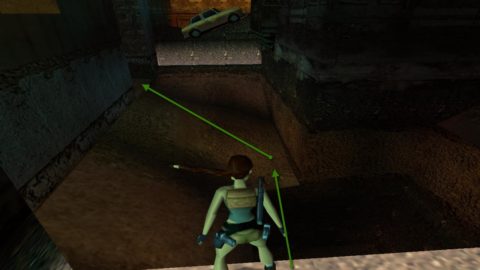 Make your way down the alley on the left. Continue down the street past the clothesline. You’ll be attacked by Locusts again. Just ignore them and continue sprinting past the Dragon.

Head back to the wounded soldier for more dialogue and then climb up into the passageway where you entered this area to return to the previous level.

Run down the corridor, climb down the ladder and follow the passageway on the left. Climb over the wall back to the street level and turn left. Run past the Minotaur to the step down. Hop onto your bike and take the passage on the right, just before the step up, to reach the Trenches level.