You begin the level in the front carriage of a train. You’ll need to work your way to the back of the train to pick up a crowbar that you can use on the broken lever at the front of the train. If you fall off the train at any point you’ll instantly die.

Pull the functioning Lever to open the door and take a standing jump diagonally across to the next car. Open the door and go inside. The camera angle is a little tight as there’s not much room in this one. There a three compartments here. Open the door to the first one and shoot the box for a Small Medipak. The second compartment has a box with Shotgun Shells inside and the third compartment is empty.

As you head to the back of this car an Assassin rolls out in front of you. Shoot him, open the door at the back and then jump across to the tarp-covered car.

Pick up the Small Medipak and Shotgun Shells. Crouch to shoot the box for more Shotgun Shells. As you walk back to towards the exit from this carriage an Assassin will attack. Kill him and then jump across to the next car and climb up the ladder. Don’t worry about going down the second hatch because there’s nothing you can do in there at the moment. Instead jump across to the next car with a tarpaulin over it. You can’t climb over it so hang off either edge and traverse across until you can pull up again.

Jump across to the ladder on the left side of the last car and run towards the back. An Assassin will pop up from the back and attack. Go to the back and hang off the edge. Let go and grab onto the crate before climbing inside for Secret #1. In this last car you’ll find a Large Medipak, Arrows and Revolver Ammo.

Climb back out, hang backwards and traverse to the right. Climb up to the top and then hang off the right side of the car. There’s a gap on the right side that you can climb in. This is where you’ll find the Crowbar, along with 2 boxes of Shotgun Shells and a Shotgun.

As you’re picking up the shells someone will open the door of the car. It’s another Assassin. Kill him and then jump over to the car with the tarp covering. From this side you can jump up to the top of it. Another Assassin will be on the car ahead. Kill him and slide down the tarp. 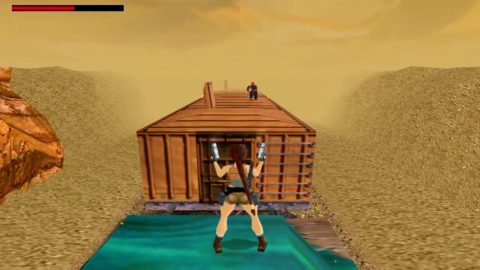 An Assassin will open the door to the next car. Kill him and jump inside. Head towards the front of this car and use the Crowbar on the wooden panel that looks like it’s been damaged slightly. Inside is Secret #2 with the Grenade Gun and 2 boxes of Flash Grenades in the wooden crates.

Climb back up the hatch and kill the 2 Assassins. Continue jumping your way towards the front of the train. Another 2 Assassins will board on the empty car. Kill them and then head back to the first car where you started. Use the Crowbar on the damaged wooden panel for Secret #3. Inside there’s a Small Medipak.

Use the Crowbar on the broken Lever and then walk towards the front of the train for a cut-scene and to end the level.