Run forwards and help the 2 Soldiers kill the 2 Giant Red Scorpions. If you accidentally shoot the Soldiers they’ll start attacking you. On the left are two ramps leading to two doors.

The first door on the left leads to a Supply Room. Shoot all of the crates to find Shotgun Shells (Wide), Uzi Clips, Grenades, a Small Medipak, Revolver Ammo, Super Grenades and Poisoned Arrows. Leave the building and go down the second ramp to the second door.

Open the door and then use the Armory Key, that you got from the dying soldier in Menkaure’s Pyramid, on the Gate. This is Secret #1 and inside the crates you’ll find Arrows, Shotgun Shells, a Shotgun, Crossbow, Grenade Launcher and a Revolver.

Leave the building and take out the Giant Red Scorpion that attacks. Continue running along the sandy path to the left towards the two pyramids. 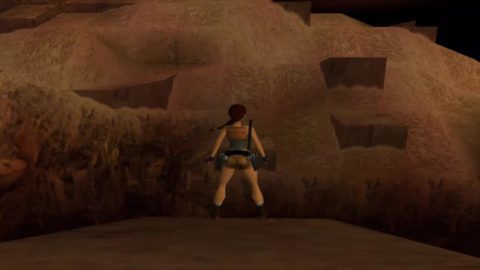 Take a running jump across the chasm to grab onto the block at the base of the second pyramid. Pull up, turn right and take a running jump to the sloped block which you can actually stand on. You’ll be attacked by a Beetle and Giant Red Scorpoion.

Run in between pyramids 2 and 3, pick up the Small Medipak and push the odd-shaped block forwards three times until it’s on the area with the faint bird symbol on it. This will open a door in the second pyramid (to your left).

Enter the pyramid, open the trapdoor and climb down the ladder to the bottom. Run through the tunnel and the gate will close behind you.

The maze has a number of recesses that either contain items or a horde of Beetles. There are lots of small Black Scorpions and stone walls that will lift up as you approach them if you’re going in the right direction. The goal is to make it to the Guardian Room to find the last Shaft Key. You begin facing south. I’ll use the N,E,S,W directions so you don’t get confused.

Walk to the first intersection and turn E. Walk forwards just as far as the second recess and look inside for Uzi Clips. Turn around to the W and walk forwards past the intersection. Look in the first recess for a Small Medipak. Walk down the corridor around the corner to the S. 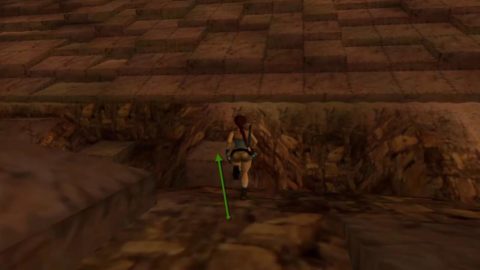 Walk to the left side of the 3 flat blocks and take a standing jump up one tier diagonally to the left. Shoot the 2 Beetles and climb up to the entrance. Use The Guard’s Keys to unlock the doors and go inside to complete the level.

Next: Level 34 (Inside the Great Pyramid)