Once you complete A Poet Under Pressure this secondary quest will automatically begin. Make your way to the Rosemary and Thyme and speak to Dandelion. He’ll explain that he needs money to turn this establishment into the cabaret that he’s always wanted. He first asks you to get a prop sword from Madama Irina who you’ve met before. She’s the head of the theatre troup.

Bring the sword and meet Dandelion in front of Sophronia’s house. Dandelion will tell you his crazy plan to “save” Sophronia from being mugged by a brigand, Geralt. She’ll be so thankful that she’ll provide the funds for establishing the cabaret. 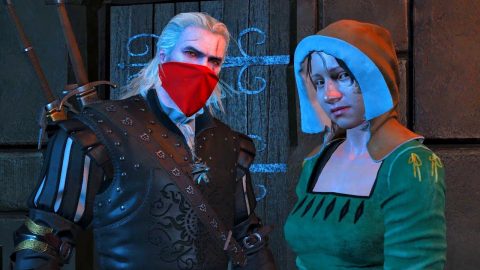 Dandelion gives you some lines to say but you can ignore them if you want. Once Dandelion, The Crimson Avenger, steps in to save the day use the prop sword to fight him. You can defeat him or let him win. This won’t change the outcome of the quest.

After the battle wait at the Rosemary and Thyme until morning for Dandelion to return. Instead of Dandelion a group of Dwarves and Priscilla will be present. The Dwarves will ask you questions about how the place should be renovated. You can either choose yourself or let Priscilla decide.

Use your Witcher senses to have a look around and find the Key to the house. Go inside and speak to the fiance. You may need to beat some sense into him. Eventually he’ll give the choreographer enough freedom to work for Dandelion.

Finally you’ll need to find some placards for the cabaret. Use the map marker to make your way to the artist’s house. His name is Rautlec. Luckily you’re just in time to stop him being robbed by a group of Bandits. Take them out and then talk to the Rautlec. He’s in a lot of debt but thinks he can pay them off by winning at the races.

Go with the Rautlec to the races at the Vegelbud’s Residence and you can either join in the race or pay of the Rautlec’s debt. If you lose the race the only way to get the placards will be to pay the debt yourself.

Once all of those chores have been completed return to Dandelion at the Rosemary and Thyme to see the new design and complete the quest.