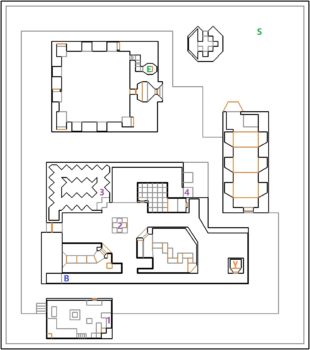 This level takes place in an enclosed courtyard with a raised central platform. On the platform are four isolated buildings with one smaller building next to your starting location. To get onto the platform you can either take a lift or use the stairs at the south-west corner of the map.

From your starting location enter the small circular building to your right. Take out the Shotgun Guys and carefully climb up the steps to the top for an Invisibility Sphere.

Take the lift up to the long building and run through it to the other side. Turn around and wait for the Imps to lift up. Use two BFG shots to take most of them out and then finish off any that remain with the Shotgun. 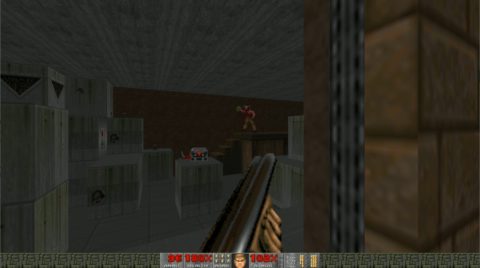 Go back up the steps and SAVE the game before going through the teleporter. You’ll be teleported to a small room inside the large central building. Quickly kill the Imps. The Plasma Gun works best and then press the Button to be lifted up. This is Secret 2. Up the top you’ll find a Soul Sphere. 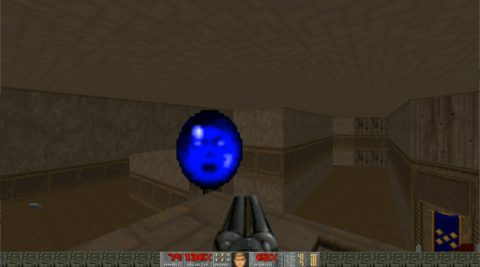 Drop down and watch out for the group of Lost Souls around the corridor to the left and the Mancubus hiding in an alcove to the right. Turn right again to find the Blue Key guarded by an Arachnotron.

Around the back, eastern side, you’ll find a small group of Mancubus. The small room in the far east has the Yellow Key but it’s guarded by a Chaingunner.

There are three rooms in the center of the building that you can enter now. A fourth will open up later. The room to the north with the small door has lots of uneven blocks. When you head towards the cell pack the wall will open revealing a Mancubus. Kill it, pick up the loot and then head back out.

The room to the south of this is filled with slime. Follow the lights on the roof and the path will lift up. Once you reach the platform hit the Switch to open up a secret. Turn around and kill the 3 Cacodemons that appear. 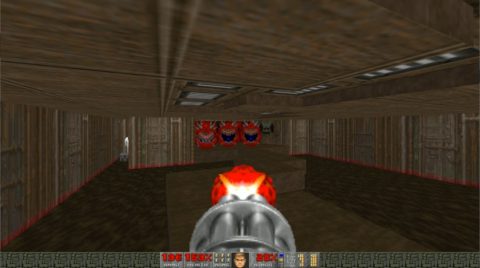 Pull the Switch in the alcove that had the Cacodemons to open the exit and then enter the room that opened up to the north west. This is Secret 3. Inside you’ll find lots of Chaingunners and a BFG in the far corner.

Come back out and open the door to the south west. Quickly run along the corridor because it lower to the room below. If you’re fast enough you can grab the cell pack at the end. Take out the Shotgun Guys and drop down. Grab the Backpack and then hit the Switch. SAVE the game again and then go through the teleporter.

You’ll be teleported to a platform outside of this building with a Mancubus behind you. Quickly back up and dodge the blasts from the Mancubus. Take him out and then drop down the hole for Secret 4. This takes you back inside the large building. Use the teleporter again and drop off the platform to the main area.

Once you’ve cleared out the other buildings head to the final building to the north. There’s a Beserker pack just in front of a slim door. When you go through the door will lock shut behind you. Cacodemons will start lifting up and down in the small alcoves all around the room. 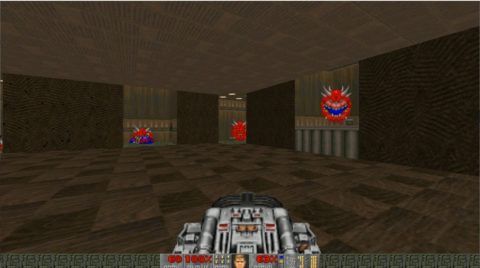 Keep moving and use the Plasma Gun or BFG to kill them off quickly. Once they’ve been killed hit the 5 Switches around the room. This opens up a path in the north east corner to the exit. Go through and get ready for the next level.