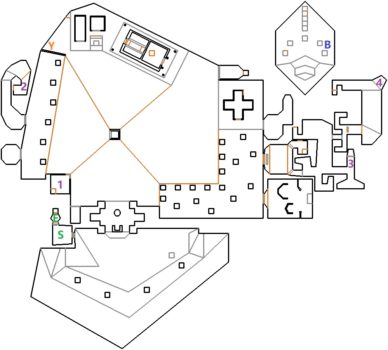 You start this level right next to the exit but you’ll need to find the Blue Key before you can go through. Open the door and take out the Imps, then go through the entrance to the courtyard on the right but watch out for the 3 Specters hiding around the walls.

As soon as you enter the courtyard you’ll be attacked  by numerous enemies. Do a few laps around the courtyard to try to bring out all the wandering monsters. With a bit of luck they should all start infighting with each other. 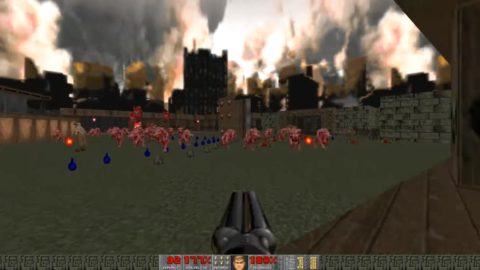 Once the numbers have been whittled down enough take out the remaining enemies with whatever weapons you like. Start exploring the outer areas. I like to start with the rooms to the west. In the second room along you’ll find a secret, Secret 2 as labelled on the map. A wall closes behind you locking you in with 2 Cacodemons. Take them out, pick up the BFG and then hit the Switch to reopen the exit.

Just behind this undercover area to the north you’ll find the Yellow Key.  Pick it up and then head over to the undercover area in the east. Take out the Hell Knight and by the Invincibility and then press the Switch he was guarding. This reveals a teleporter in the alley just to the north. Quickly go through the teleporter to be taken to Secret 1 on the map. Press the Button and drop back down to the courtyard.

Head back to the eastern undercover area. When you enter the middle room a wall will lift up behind you, trapping you in. Press on the green corner wall to open it and take out all the Shotgun Guys and Demons on the other side.

Explore the area to the right and press the Skull Button on the blue wall for Secret 3. The wall will lower revealing a Chaingun. 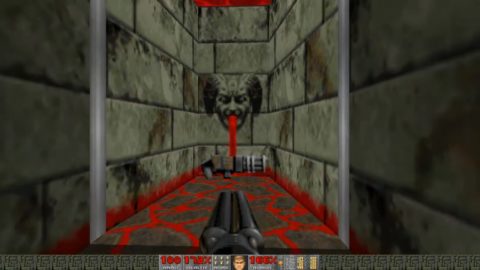 Explore the left side of the area and hit another Button to lower down a wall revealing a new area to the east. Take out the Specters and head through the teleporter. Ignore the items on the ledge. That’s the final secret but you can’t reach it from here. Hit the Button to open the exit and head to the next room.

Grab the Invincibility before entering the last room to the south because when you enter you’ll be telported to the other side of the room and surrounded by enemies. Kill them, grab the Cell Packs and head back outside.

Run back to the north-west corner where you found the Yellow Key. Stand on the darker area of grass in the very corner and you’ll be teleported to Secret 4, the ledge that you just walked past in a previous room. It has the Computer Area Map. Drop down and go back through the teleporter.

The only place you haven’t explored is up the stairs to the north. When you walk up the steps the building ahead will open and a Revenant will attack. Take him out and then open the door to the right for a Soul Sphere. When you grab it the walls will lower revealing a bunch of Demons. Take them out and then head back to the central pillar. Grab the Invincibility before continuing. 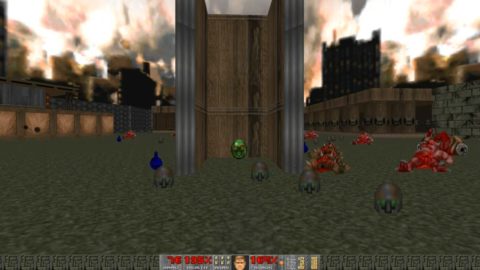 Quickly run back up the steps and go through the Yellow Door on the east side of the building to the left. Go through the teleporter to a room filled with Cacodemons. Use the BFG to take them out quickly and then pick up the Blue Key which is disguised as one of the health potions.

Press the Button on one of the pillars to lift up steps to the teleporter and go through to be taken back to the courtyard. Make your way back to the beginning of the level and use the blue key to open the door to the level exit.