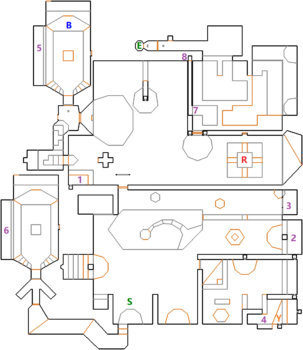 Once you start this level you’ll need to move quickly to get the first secret. It’s only open for about 30 seconds. Quickly run up the steps and dash across to the other side of the gap. Go through the door, turn left and pick up Secret 1.

Go back through the door, jump into the slime and press the Button to lower the lift. Ride it up and take the stairs back down. A room with Demons will have opened up. Save the Invulnerability for later.

Make your way to the eastern corridor. The back room will open up releasing a bunch of Imps. Press on the Flame in the center to open up the next corridor. Once again take out the enemies that appear from the room at the back. Make sure you go inside both of the rooms at the end of these corridors for Secret 2 and Secret 3.

Head back to the door that you skipped in the south-east corner of the level. Grab the Invulnerability from the room with the Pink Demons and go through. Pick up the rocket to lower the bookshelves and then press both the Skull Buttons to open another room and lower down a shelf. With all of the enemies running around take them out with a BFG. You want to kill the Arch Vile before anything else because he will bring the other enemies back to life. 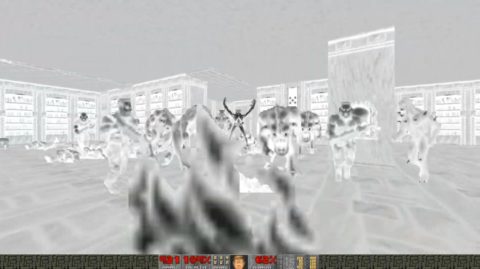 Once the room is clear press the left Button again to open the small room and grab the Invulnerability and Yellow Key. Another small room opens up that release a few more Hell Knights. Press another Button to open up Secret 4 and release yet another Hell Knight.

With that done head back through the central door to the northern part of this level.

Press the Switch on the left wall to lower down a circular section. Take out the Imps and go through. The Yellow Door is to the left but you may want to do a loop around first to clear out all the enemies. When you’re ready go through the Yellow Door.

First head up the steps and grab the Blue Key. Then get your BFG ready and press the Skull Button on the right side of the room. This opens up a section filled with Mancubus. Drop down to hide under the ledge and use the BFG to take them out. 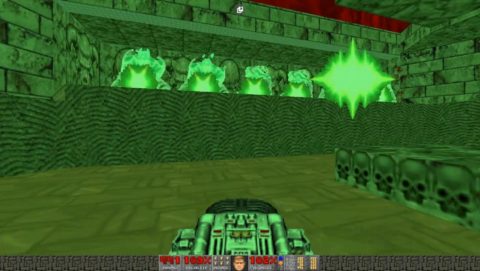 When they’ve been killed go up the steps to their area which is Secret 5. Shoot the far wall where you picked up the key to release 3 Revenants. Quickly take them out with rockets and pick up the Energy Cells.

Drop through the central teleporter. This takes you to a room that looks exactly the same except all of the Revenants and Mancubus have already been released. Once again hide behind the ledge and take out the Reventants first. Carefully clear out the Mancubus as well. You’ll be rewarded with 2 Soul Spheres. The area with the Mancubus is Secret 6.

Hit the Skull Button to open up the exit from this room. Take out the Mancubus, Revenant and Chaingunners and then run straight ahead through the lava.

Open the door and then lower down the lift. Clear out the enemies, open the door at the end and pick up the Invulnerability Sphere before going through. You’ll be teleported back to the northern section of the level.

Open the level and take out the Revenants. Make sure you press on the Blue Button to the right to open up the central section and release the Hell Knights. You should be able to take out all or most of them while you’re still invincible.

When the coast is clear grab the Red Key. Go through the Red Door just to a little to the west and enter through to the last section of this level.

There are 2 Skull Buttons here. One on the left and one on the right. The left Button lowers down the floor so you can reach the exit.

Move forwards to hit the right Button and half a dozen Pain Elementals will be released. Use the BFG to take them out quickly. 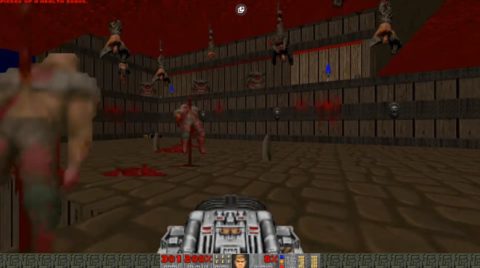 Press on the right Button to lower the floor to the left so you can get down to Secret 7. Run forwards to the teleporter which is Secret 8. Going through the teleporter takes you up to the ledge where the Pain Elementals came from.

Pick up all the goodies and then drop down. Press the left Button to lower down the floor. Take out the enemies, including an Arch Vile around the corner and then go through the Red Door to the level exit.