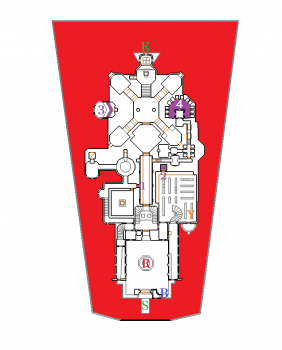 You begin this level on a pier outside the fort. Ignore the Lost Souls and Cacodemons floating around out here and enter through the large door. Run past the pillar in the courtyard and open the room into the keep entrance room.

If you wait long enough a Baron of Hell will teleport in front of the Red Door. Ignore him for now if you don’t have the ammo to deal with him. Instead head to the right for Green Armor and then to the left and up the stairs. Take out the Shotgun Guys. They’ll leave behind quite a bit of ammo. 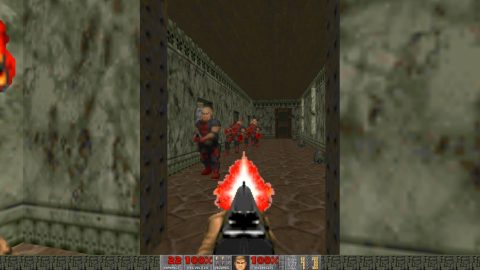 At the end of this room you’ll notice a Skull Button. Open the door at the end and then press the Skull Button to lower down the pillar with the red key. Quickly head out the door and drop down to the courtyard so you can pick up the Red Key.

By now you should have enough ammo to deal with the Baron of Hell if he’s still wandering around. Head back to the entrance room with the Red Door but don’t go through it yet. Go to the right and enter into the library.

Take out the Imps and Demons and then head up the stairs to kill the rest of the Shotgun Guys. The red tapestry on the south wall of the library is a secret door that opens out to a balcony with a Berserk Pack. 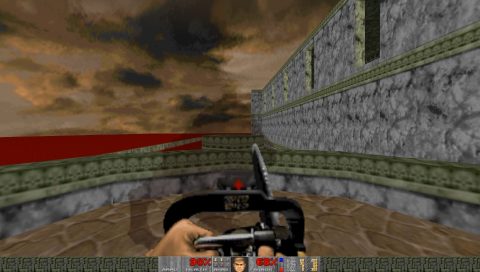 The three black tapestries hanging on the book shelves in the center are illusions. You can walk through them. One of them hides a Skull Button. Pressing it will open up Secret 2 on the ledge above. You won’t be able to reach it just yet.

Head up the stairs and down the side corridor. Walk along the ledge and press on the Skull Button at the end to open up the wall and reveal the Blue Key. Just to the right you’ll find Invulnerability.

Quickly run back to the main entrance and up the stairs to the Red Door. Go through to the hallway and take out the Baron of Hell before your invulnerability wears off. When you enter the hall the second face on the left is Secret 1. Open it for Blue Armor. 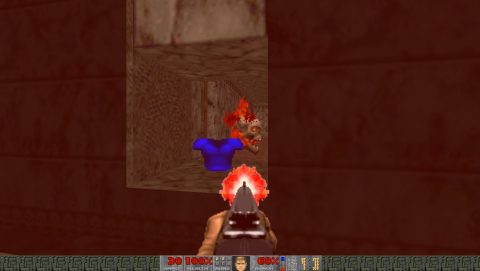 Open the door immediately to the left and take out the Lost Souls. Walk over the hole in the center and a platform will lift up with a Cacodemon and Radiation Suit. Grab the suit and quickly run down the hall to the west and out the window to the blood sea.

Take out the Mancubus and pick up the Rocket Launcher behind him. Move quickly to the north and kill the Lost Souls guarding the Chaingun. This is Secret 3. 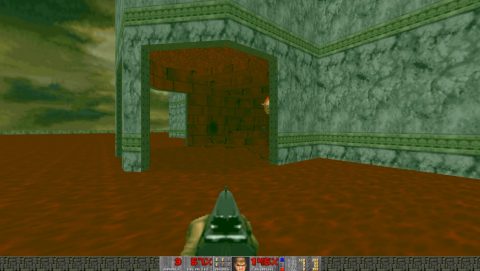 Continue around the fort until you come back to the pier at the front entrance. Go through the Red Door again and then through the secret on the left side. This time take a right to the room with the large hole in the middle. A Pain Elemental will rise up from the hole. Take it out and then continue to the left.

Open the wall behind the fireplace but watch out for the Specter that teleports in behind you. Press the Button in the dark room behind the fireplace and go back to the room with the hole in the center. Now a part of the wall will be removed. Take out the second Pain Elemental and drop down so you can go through the teleporter. This takes you to the top of the the library. 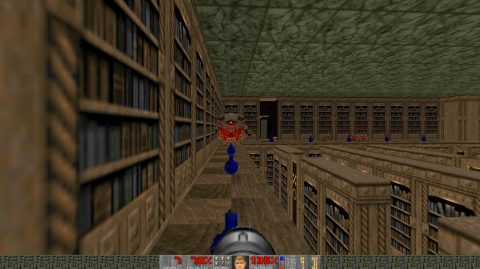 Head into Secret 2 that you opened up by pressing the Skull Button behind one of the tapestries for a Super Shotgun but watch out for the crushing ceiling. Run across the tops of the book shelves for the Yellow Key.

Go back to the hallway past the Red Door and open the red tapestry just to the right of the Blue Door. Open the door on the left side at the end of the hallway and take out the Imps and prisoners in their cells.

Run quickly through the next corridor because the ceiling is a crusher. Take out the Imps and Revenant. The circular room beyond has more cells with Shotgun Guys and a Chaingunner inside. This is Secret 4. Take them all out and pick up any ammo you think you may need. Save your game on the way back just in case you get caught by the crusher.

On the way back open the room to the west but take out the Hell Knight before stepping inside. When you enter the door locks shut behind you. Grab the SoulSphere and shoot the wall behind the fireplace to open the door again. 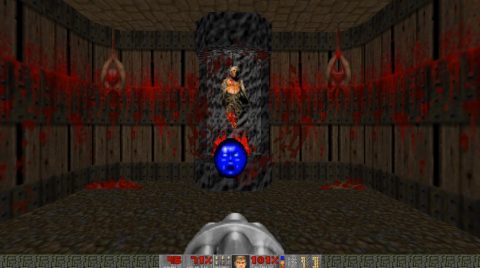 Head back and open the Blue Door but be careful of the two Pain Elementals on the other side.

Open the Yellow Door, run in and then quickly back out again. Four Hell Knights will be alerted to your presence and will come chasing after you. Take them out and then enter through the Yellow Door. You’ll need to press the four switches behind the crushers in each of the corridors to open the wall to the throne room.

Some of the switches have a safe space where you can wait for the crusher and the others you’ll need to press the switch and quickly back out again. Once the throne room is open head up to the throne and take out the Arch Vile.