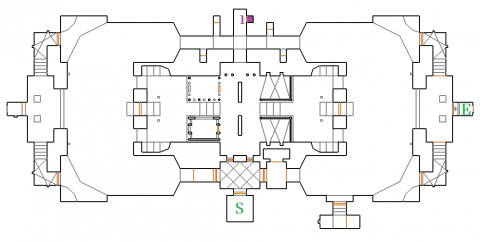 Nessus is a smaller level designed by John Anderson. There are no keys to find and only one secret. There’s also plenty of ammo and health if you know where to look. From the Starting room pick up the Shotgun and open the door to the north. From here you can take elevators down on the left or right side but we’ll do that later.

Instead open one of the two thin doors to the north. Wait for the enemies to get close and take them out. Head out and explore this area. You’ll to find a Chainsaw, Plasma Gun, Rocket Launcher and Super Shotgun. Look out for the Revenant behind the fake wall to the north. Take him out and then dash across the pit for a MegaSphere. Open the panel to the right for a BFG and Secret 1.

When you dash across the pit you’ll alert a Cacodemon. Wait for him to float up and take him out. If you fall down the pit you’ll end up in one of the side passages between the two outdoor areas.

Explore the western outdoor area by taking the lift near the Start, dropping down the pit or going through the western door. Take one of the lifts up and open the door. Kill the Baron of Hell and Hell Knight and then press the Button. This opens the door to the exit.

Now explore the eastern side of the map and take out all the enemies if you’re going for 100% kills. Take up one of the lifts and the door to the exit will open automatically when you get to the top of the stairs. If you’ve pressed the Button on the western side press the Switch for the Exit.