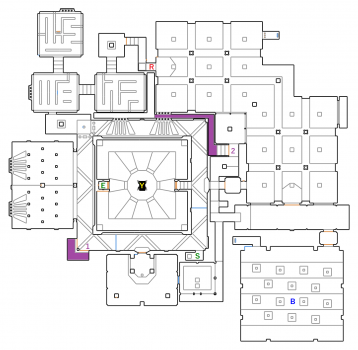 Make your way around to the left and grab the Super Shotgun from the first room on the left. The walls will open up revealing a large room. Take out the enemies and then press the Button on the far pillar. This opens the door to the east. Go through but don’t step too far into the room. The floor will give way and drop down to the lava below.

Go back to the hallway and continue to the west. Open the wall in the corner for Secret #1 with a Backpack and Rockets. Continue around the hallway to the north and press the Button on the central wooden pillar.

Head back the way you came and continue around the other side of the hallway. Enter the room on the right. Go to the north and kill the Arachnotrons. Open the wall in the passage just before the Arachnotron room for Secret #2. This reveals steps to a thin passage. Follow it along for a BFG and a Mega Sphere.

Once you’re done take the lift down to the large open room. Clear out all the enemies and grab the ammo. You’ll be back here later once you have the blue key. For now go back up the lift.

Continue to the south. There’s a corridor to the east and a room to the south. Clear out the eastern corridor and then head down to the south. This takes you to the outer ledge of the room with the armor. Kill the enemies if you haven’t already and then dash across to grab the Mega Armor. 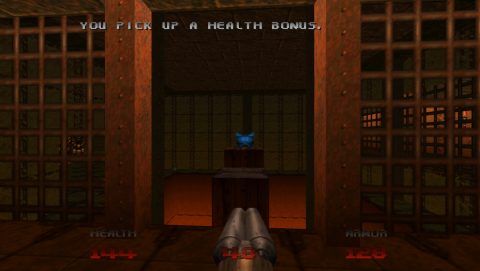 Now head back around to the eastern section and this time go to the end of the eastern corridor. Take the lift at the end down to a room with Barons of Hell. Kill them all and then leave the room.

Strafe run through the open window across to the Invulnerability. Quickly make your way back around to the previous room. Turn to the right and press the Button in the side passage. This activates the traps but also reveals the Blue Key. Grab the Blue Key while you’re still invulnerable and then get out of there.

Drop down to the large room and open the Blue Bars to the north. Press the Button to lower down the bars in the northern section of the main hallway.

The northwest corner of the main hallway is open so press the Button and ride the lift down. You’ll be taken to a library section with 3 rooms.

Clear out the enemies and press the Button in the northern room. This gives you access to the red key. Take the eastern exit from the first room, go north and then follow the stairs up to a lift. Ride it up, grab the Red Key and drop back down into the large room. More enemies will spawn in so take them out. 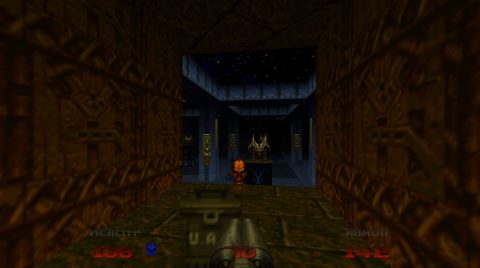 Clear out the enemies and dash through the central fire for the Yellow Key. Once you’ve killed the Barons of Hell that spawn in go through the Yellow Door to the west to find the Exit.