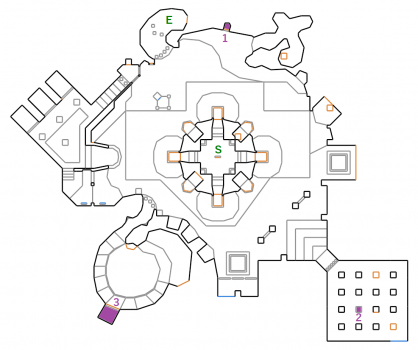 Press the Button to open the four doors and drop down one of the sides. The outer area is filled with Nightmare Imps, a Cyberdemon and Mancubus on moving platforms. Clear out the area as you circle around to avoid getting targeted by the Cyberdemon. Kill the first Cyberdemon. There are three in total in this level and you can only Exit by killing all of them.

The central building has a series of small lifts at the corners. Ride the one on the northwest and dash across to hit the Button. This lowers down the Rocket Launcher. Ride the same lift again and shoot the tile on the pillar that has a different face. This opens up a small room in the lava with a BFG. This is Secret #1. 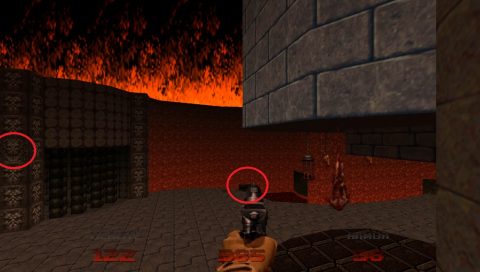 Now that you’re in the lava section go into the cave to the right of the BFG. Kill the Imps and then go through the teleporter. Walk up the stairs and grab the Armor. Lost Souls will emerge from the rooms that open up to the sides. Kill them and then dash out the window to right. 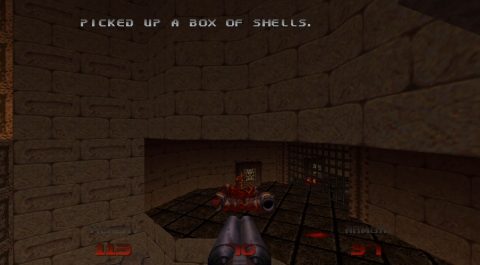 Press the Button and you’ll notice a second Button behind the cage wall. You’ll need to press both of them to release the final 2 Cyberdemons.

Ride the lift up on the northeast and go through the teleporter. You’ll be taken to the platform to the northeast with the Mega Armor. When you grab it Zombiemen will appear below.

Ride the lift up on the southeast corner for Rockets. Drop down and go into the room of pillars ahead. Press one of the Buttons on the pillar to lower down a pillar elsewhere with the Super Shotgun. The pillar with Buttons will have 3 Buttons. Press on the side that’s missing a Button. Another pillar will lower down with the Backpack. This is Secret #2. 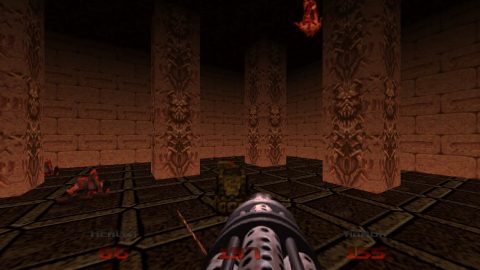 Ride up the final lift, the one on the southwest corner. Press the Button up the top to lower the bars to the passage to the southwest. Drop down and go through. Take out the 3 Pain Elementals and open the wall halfway down for Secret #3 with a Plasma Gun.

Continue down the spiral stairs to the Super Charge. When you grab it 3 Mancubus will appear on the ledge above. Kill them and head back out.

Now that you have all the secrets it’s time to release the Cyberdemons. Drop into the lava and enter the cave. Go through the teleporter and head up the stairs. A new passage will have appeared. Go through and press the Button. The Cyberdemon cage will open. Drop down and kill them to complete the level.