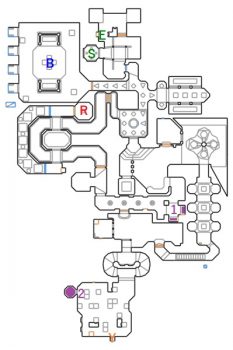 From the Start take out the enemies in the surrounding rooms. The Exit is through the yellow door to the left so you’ll be coming back here at the end of the level. For now open the door to the dark corridors.

Head down to the south and press the Button on the pillar to turn on the lights. The pillar will open up revealing the Mega Armor. The passage you passed by will have opened up. This leads to the Blue Key. Clear out the area and press the Switch on the pedestal with the key.

The key will teleport around to the pedestals in the corners. When it stops a wall will open up with four alcoves. Press the Button in the alcove that doesn’t have the small side walls. This lowers down the Blue Key. Quickly run and pick it up but watch out for the Imps that spawn around you.

Leave the room and head down the passage on the opposite side. A lift will lower down into a room with the Chaingun. When you pick it up Demons will be released from the side rooms. Take them out and then head back up the lift.

Go back to the room that had the light switch and open the Blue Door. Follow the passage around and clear out the Imps on the top level. When you’re done drop down one of the gaps in the floor.

Make your way around but watch out for the crushers. The yellow squares on the ground show you where it’s safe to stand. 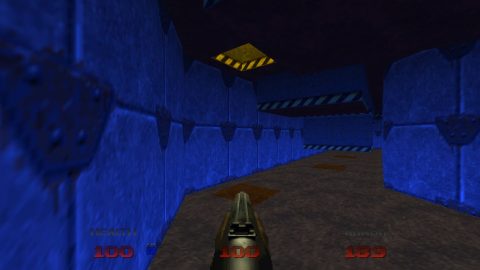 At the end you’ll find the Red Key. Grab it and make your way back past the crushers to the teleporter which takes you back up to the corridor above.

Continue through the corridor to the Blue Door at the other side. Kill the Imps and Demons and then press on the panel on the wall on the right side, between the third and fourth circle of light on the ground. This lowers down a lift that takes you up to Secret#1. There are two small alcoves here with Rockets and Bullets.

Drop down the hole and head through the dark passage. Press the Button at the end to open the wall. Go through and head up the escalator. Open the door to another outside area and take out the enemies. 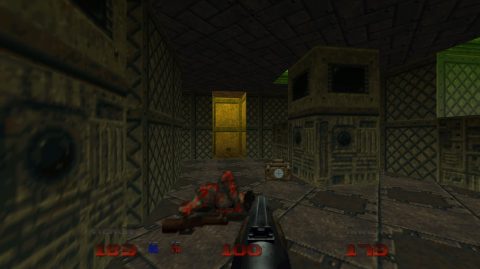 This also opens up Secret #2. A little room in the northwest corner of this room with Boxes of Rockets. Grab them and then head back to the Start.

Open the Yellow Door, take out the few Imps and press the Switch to complete the level.