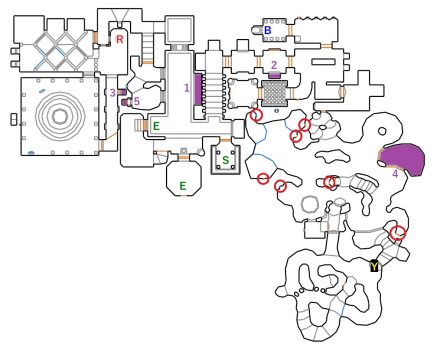 From the Start open the door and clear out the enemies around the starting area. For Secret #1 head around to the left, then right and go through the fake wall. Inside you’ll find a Supercharge. 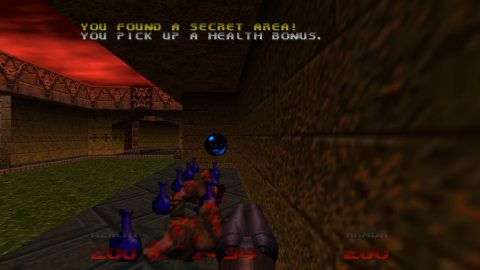 Continue to the end and drop down to the left (west on the map). Take out the Lost Souls, go up the steps to the south and press the Button. Four Hell Knights will appear outside. Take them out and then go down the stairs opposite the room where you started.

Go through the door at the bottom and continue through to the second room. Press on the carving on the wall on the north side to open Secret #2 behind the bookshelf on the south wall.

Go through to the next room which has three exits. Open the door to the south and press the Button to open the next door. Clear out the enemies and then press the Button in the second room. This lowers the bars to the Blue Key.

Go to the room to the north and stand on the small step. Shoot one of the Buttons and the pedestal with the Blue Key will lower. Quickly run and pick it up.

Head back to the starting area, go around past the fake wall and drop down again. Follow the passage around to the Blue Door and go through.

Make your way around the fencing but watch out for the arrows that will begin shooting out once you’ve made it half way. Open the door on the other side and go into the dark room. There are two Buttons here. Press one to turn on the lights and the second to lower down the central wall. Take out the 3 Pain Elementals as they drop down and then clear out the Hell Knights. 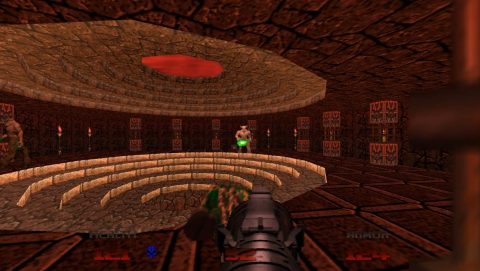 Once you’ve killed off all the Hell Knights a passage on the east wall will have opened. Go through and open the third carving on the right for Secret #3 with the Plasma Gun. Continue into the next room and lower down the pedestal for the Red Key.

Kill all the Hell Knights and walk down the passage of bookshelves. Open the one second at the end on the left get access to the large outdoor area.

There are a number of Buttons you’ll need to press here, circled in red, and Secret #4 on the eastern side. Inside the secret you’ll find a Megasphere.

The Buttons on the northwestern side lower down a series of ledges. Make your way from one to the other to the final Button. The Button in the southwest side opens the circular section behind it with a Baron of Hell and Supercharge. 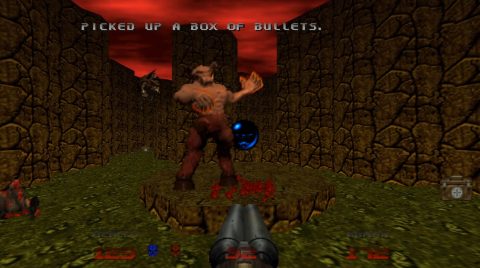 Drop into the lava and make your way around to the right. You’ll find a Radiation Suit along the way. There is one back in the outside area just behind where the yellow key is located which you might want to grab before coming in here.

Open the door to the regular exit, kill all the enemies with the BFG but don’t press the Button. Instead turn around, head back out the Yellow Door, turn to the left and go through the Secret Exit before it closes. 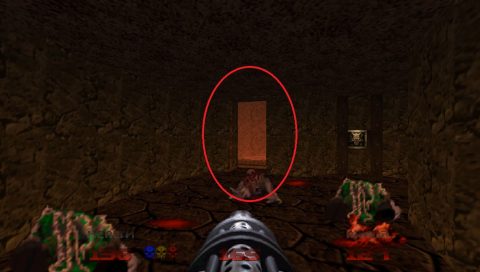 This exit is only open for a few seconds so you’ll need to run. When you go through it takes you to Level 31.