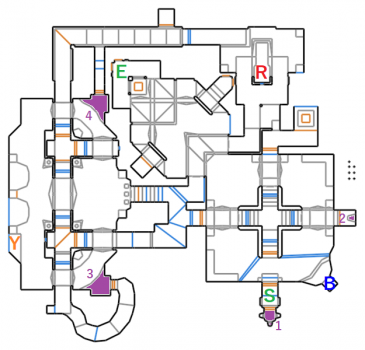 From the Start turn around and open the wall behind you for Secret #1 with a Berserk pack. Open the door and take out the Demons and other enemies. The Blue Door is just in front of you so you’ll be back here later. For now do a lap round the central structure to clear out all the Imps and Zombiemen.

Go through to the courtyard to the northwest and press the two Buttons down the stairs. This does two things, it opens up a wall on the other side with a Super Shotgun and a Backpack and reveals the Blue Key in the southeast corner of the first courtyard.

Go back and grab the Blue Key and then go through the Blue Door. Inside take out the 2 Barons of Hell and the Hell Knight and then head up the stairs.

Open the door to the left, turn around and run to the other side for Secret #2 with a Rocket Launcher. 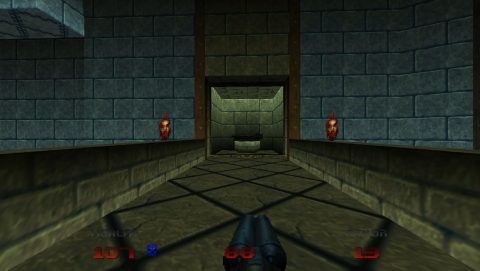 From the center the Red Door is to the north so the only way to go is back through the door to the west (left as you enter through the blue door).

Take out the Specters and make your way along the passage to the north. Use the BFG to quickly clear out the room with the Red Key. You can’t reach it yet but there is a Button here so press the Button to lift up the stairs to the next courtyard.

Go back the way you came and take the stairs up to the courtyard. Take out the Hell Knights on either side and press the Button on the west side. Have your BFG ready because when you press the Button Specters and Lost Souls will spawn all around you. 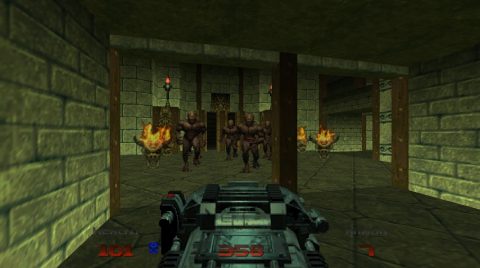 Go through to the right and press the Button. This opens up the door back the way you came so head back and go through the teleporter. This teleports you onto the ledge with the Yellow Key. Before dropping down dash across to the Button on the wall and press it. 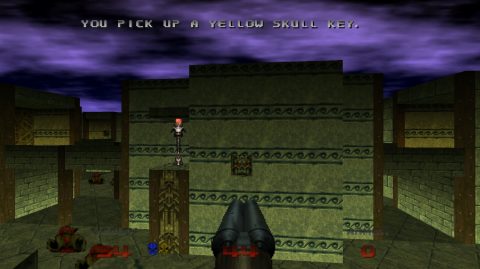 Take the lift back up and a passage will have opened to the left. Follow it around to the ledge that had the Hell Knight. This is Secret #3. Dash across for the Supercharge.

Go back up the lift and this time go to the right. Go through the Yellow Door and take out the Cacodemons. Getting to the next secret is a little bit tricky. Run along the side of the wall on the left side to open a hidden room. Go inside and dash across to the other side. Run back along the side of the wall and a passage opens up to Secret #4. Dash across to the Mega Armor.

Make your way back up the lift one final time and go through the Yellow Door. Head down the passage to the upper level of the room with the Red Key. When you pick it up Lost Souls will spawn in.

Go back to the starting area and take the Red Door to the north. Kill the Barons of Hell, go through the teleporter and press the Button to complete the level.