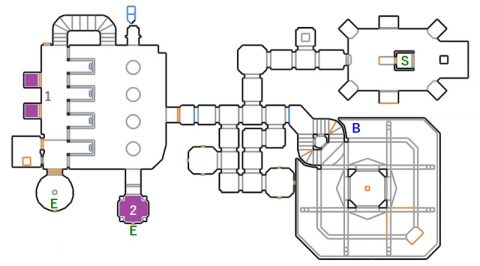 From the Start turn around and open the wall behind you. This isn’t a secret but it does contain a Berserk pack. Press the Button to lower the lift down and take out the Demons and other enemies.

When you’re down head out through the only exit from this room. There’s a Supercharge in a room to the left but leave it for later unless you need the health right now.

Clear out the Imps and Hell Knights and do a lap around the central room until the windows open. Kill the Imps inside and notice the Button going up and down. When it rises up shoot the Button to open up the space between the stairs with the Chaingun. 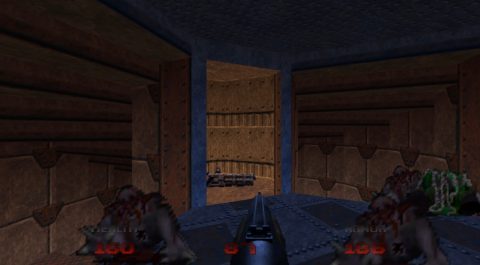 Grab it and then drop down the corner of the platform to the outer corridor with Lost Souls. Make your way around to the left to find the Blue Key.

Take the lift in the corner back up. Go down the stairs and go left to the second Switch room. Hit the 3 Switches to reveal a door on the western side leading to the control room.

Go through the door and kill the Lost Souls on the other side. Head up the stairs on the right, clear out the enemies and take a look at the control Switches. These control the pillars in the center of the room. While facing them hit them in this order (numbered from left to right): 3 1 2 4.

Lost Souls and Hell Knights will spawn in so take them out before continuing. The Hell Knights are guarding the secret exit in the room below.

Press on the screen just by the entrance to this upper area to open up the two rooms. They are both Secret #1 and one of them has a Supercharge.

The regular door up here leads to a teleporter and the Blue Door leads to the regular exit. We’re taking the Secret Exit so go through the teleporter. 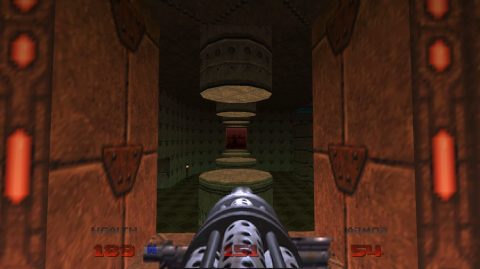 Take out the Hell Knights if you haven’t already and dash across the pillars. You’ll need to strafe run across the gaps to make it to the other side. Hit the Button on the other side to go to the next secret level.