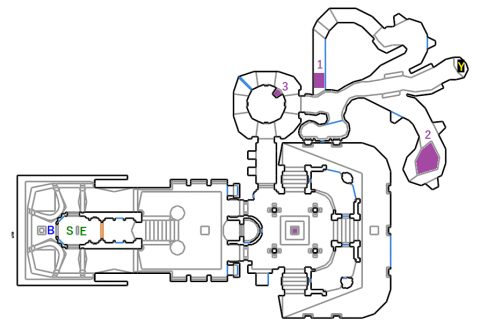 From the Start open one of the side doors and clear out the Imps outside. Lost Souls will make their way towards you from the next courtyard. Once you’ve killed the Imps the Blue Key will appear. Grab it and head through the Blue Door.

Press on the middle panel on the right side to lower down the stairs and go down to the next courtyard. There are two small alcoves, one on either side. When you go into them a Button will lower down. The one on the left opens the door to the next building. The one on the right spawns in Imps. Kill them and a teleporter will appear. Step on it to be taken to the small room with the Supercharge.

Head into the room to the east (as shown on the map) and press the Button on the wall as you enter. This lifts up 3 staircases. Run up the stairs and clear out the enemies. Enter the wooden room on the north east side and look out through the window to the west. You’ll see a Button on the other side of the room. 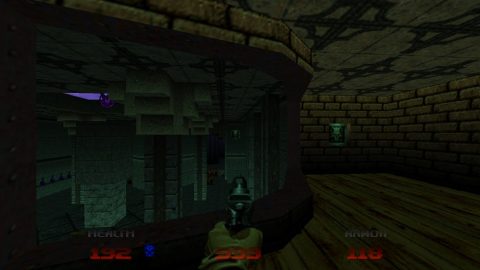 Shoot the Button, look out through the other window to the south and shoot the next Button. The central pillar will lower with the Unmaker Upgrade Artifact.

Go into the other wooden room and then walk through the window leading out to the stairs. This lowers down the shelf with the Health Bonuses and also reveals a Plasma Gun.

Now press both Buttons in the wooden rooms to open up the passage to the north. Go through the other square window in the other wooden room and two small alcoves will open up in the passage you just opened with bullets in each one.

Head down the spiral stairs and take out the Lost Souls in the passages below. As you enter press on the statue that’s lit up on the right. This opens up the path to the left that leads to the Mega Armor. This is Secret #1.

Once you have it head through the passage to the right. Another section will have opened with the Supercharge. This is Secret #2. Grab the Yellow Key. Go to the small passage to the right as you enter this area and a Button will open up. Press it to lift up the Exit back in the starting area.

Before you leave press on the second statue that’s lit up in the passage on the north side. This lowers down Secret #3 in the spiral stairwell for a few seconds. Quickly run back and grab the Berserk pack before it lifts up again.

Fight your way back to the starting room and hit the Exit Button to complete the level.