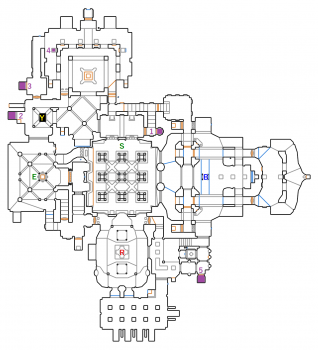 This is probably the longest level of the Lost Levels. You begin in a square room roughly in the center of the map. Kill the Arachnotrons and then go along the blood river on the western side.

Enter through the door at the end and follow the steps up around on the right side. Follow the walkway around the outskirts of the blood river and press the Button at the end. This lowers down the bars room with the Blue Doors. Make your way back to the blue door and go up the stairs. Press another Button and the bars on the north side of the starting room will lower down.

Drop down to the starting room and go up the steps on the north side. Press on the flashing pattern on the wall on the right to open up Secret #1 down the stairs behind you. inside you’ll find a Supercharge. Continue up the stairs and go through the door. 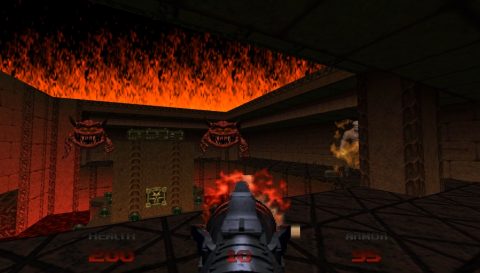 Clear out the enemies and then dash across to the central structure. Press one of the Buttons to lower down the pedestal with the 4 boxes of rockets. Grab them and then drop down into the blood river.

Find a safe spot to take out all the enemies that spawn around you. When the area is clear take the teleporter back up to the pedestal. Dash across to the outer ledge.

The windows will be open to the north so take out the Arachnotrons on the ledges. Open the door on the western side. Press on the small pedestal to open up a hole in the wall to the right. Shoot the Button at the end of the hole to open up Secret #2 with Mega Armor. 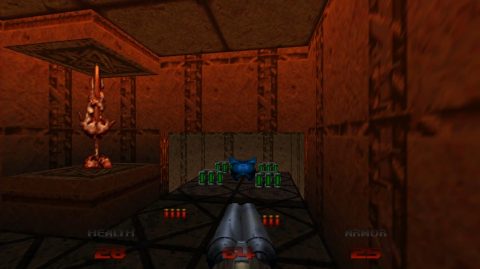 Open the door to the north and then the wall on the west for Secret #3 with the Computer Area Map. Continue to the north and press the Button. You’ll notice a bridge lift up across the blood river.

Head back around to the bridge but drop into the blood river on the eastern side. Press the Button on the side of the first pillar to lower it down. Ride it up and press the Button above. This lowers down the next pillar. Continue doing this until you get to the last pillar with the Berserk pack. This is Secret #4.

Step into the teleporter to be taken back up and head across the bridge. Open the door, kill the Hell Knight and press the Button. Make your way back to the room with the Yellow Key which should now be lowered down. Drop down into the blood river to pick it up.

Go through the teleporter, dash across and quickly go through the door to the right. Fireballs will be activated as soon as you teleport into this room.

Walk halfway down the steps and go through the Yellow Door. From here you’ll enter into the eastern section of the map.

Make your way across the short bridge and into the small square room. Take the lift down to the blood river. You’ll need to hit both Buttons on either side of this area. Then head back up the lifts and press both Buttons in the small rooms near to the Blue Doors. 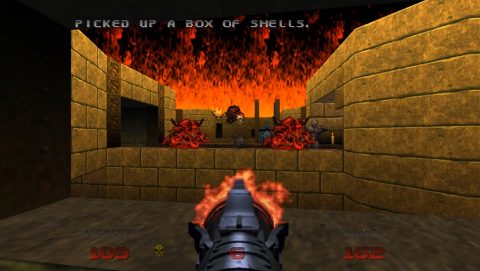 Each time you press a Button 2 Pain Elementals and other enemies will spawn into the area. Go through one of the doors to the east and clear out the enemies. Step into the teleporter at the far end of the room. This takes you to a pillar looking over the Blue Key. Run across the pillars to pick it up.

Go through a nearby Blue Door and then through the teleporter. You’ll be taken to an earlier room with the Blue Doors. Go through the other Blue Door to the east and you’ll be in a large room.

Drop down into the blood lake to the south and kill all the Specters, Hell Knight and Barons of Hell. Press the Button at the other end of the room to lift up a walkway through the gate and take the teleporter back up.

Go through the door to the east and run across the walkway that you just raised up. In the hallway press on the spike with the single skull on it in the recess to the right and Secret #5 will open behind you. Inside you’ll find some ammo.

Continue forwards up the stairs and around into a small room. Press the Button and the Red Key in front of you will disappear. Make your way back to the previous room and the Red Key will have appeared in the center. 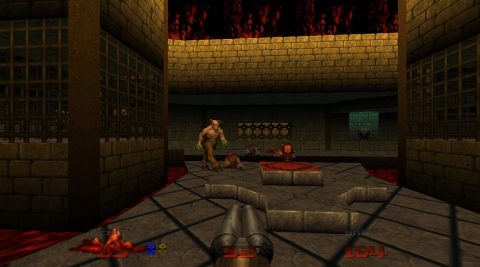 When you pick it up Mancubus and a Baron of Hell will spawn into the room. Take them out and then the bars will lower that were blocking the door back to the west.

Go up the stairs to the right and lower the Red Bars. Enter the room and use the BFG to quickly kill off the Pain Elementals and Lost Souls. Enter into the teleporter in the center to complete the level.