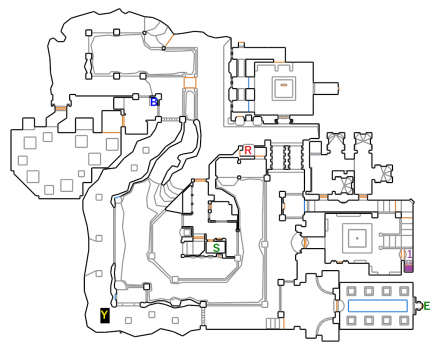 Open the door and clear out this small building. You can look out the side window to take out the Cacodemon and Nightmare Imps on the ledge opposite. You can press on the symbol to open another window which might make it easier to take out the other Cacodemons floating around outside.

When you’re done open the door and head down the steps. Finish off any Imps and press the Button around the side. This lowers down a Super Shotgun back by the steps although it isn’t a secret.

Drop down into the water and go into the tunnel with the Lost Souls for a Mega Armor. You can continue forwards to take out a couple of Cacodemons if you want. 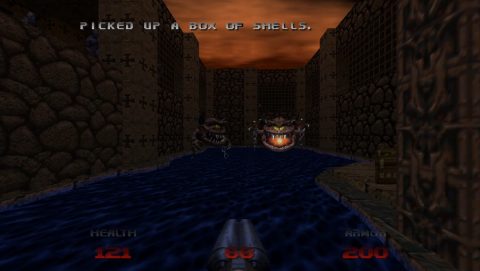 Head back through the tunnel and follow the water around to the end. Take out the Hell Knights and then take the lift up to the Red Key. Press the Button to lower down the two ledges and then drop down to grab the loot.

Once you exit through the red door make your way around to the right and dash over the gap. Take out all the enemies here and then go through the long blue tunnel. About half way through go through the window and press the Button. This lowers down all the pillars in the tunnel and lifts up a ledge next to you so you can grab the Supercharge. 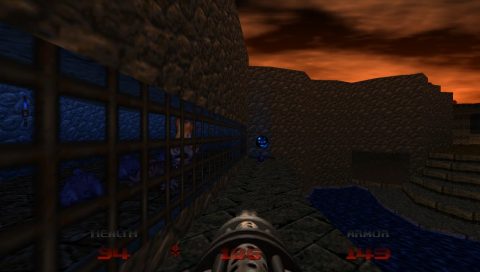 Go back inside the tunnel and pick up the Yellow Key which was inside one of the pillars. Make your way out the way you came and then head around the ledges to the Yellow Door. Inside you’ll find a slime room with small platforms.

Make your way across to the other side and open the door. Watch out for the 2 Hell Knights on the other side. Inside this room you’ll find the Blue Key. 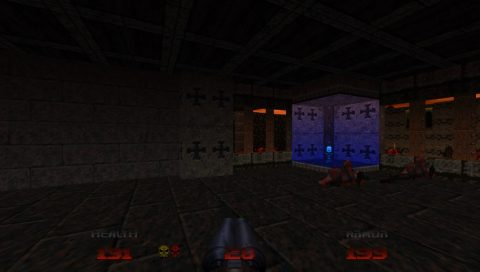 Go out through one of the windows and go back through the blue tunnel. Follow the path around to the Blue Door. Go through and take out the Demons and Barons of Hell inside. To get to the only secret in this level press on the carving to the left and then lower down the bookshelf by the stairs. Quickly ride it up and grab the Plasma Gun before the bars lift up again. This is Secret #1.

Head up the stairs and go through the door to the right. Clear out the enemies and grab the Supercharge for some health. Press the Button in one of the rooms to extend the hallway outside. Press on the flashing bookshelf to reveal a small room behind it with more ammo.

Leave the library and head to the right. When you step forwards the windows open. Kill the Lost Souls and Cacodemons and then press the Button. This creates stairs up to the next Yellow Door just past the Blue Door (southeast corner on the map).

Take the stairs up to the Yellow Door, take out the enemies, and then go through. Step forwards and the room will go dark. Take out the Lost souls but stay on the central tiles. The outer area will lower down to the lava. Dash across to the Exit to complete the level.