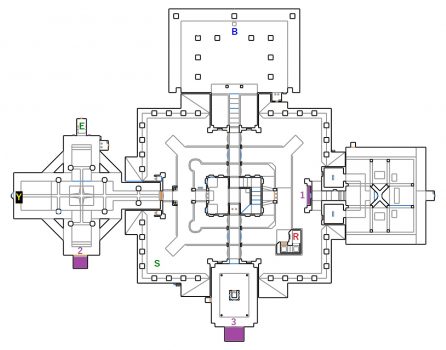 From the Start do a lap around the temple in the water area and kill all of the Arachnotrons. Take the teleporter up to the walkway around the temple. From this walkway you should be able to kill the Barons of Hell on the next inner walkway. Watch out for the fireballs that shoot out from either side of the temple.

Take the lift up to the inner walkway and press the Button around one side. This opens up the center of the temple. From the lift shoot the gold face on the wall to lower down the ledge. Dash across to the ledge for Secret #1 with the Unmaker and some other goodies. 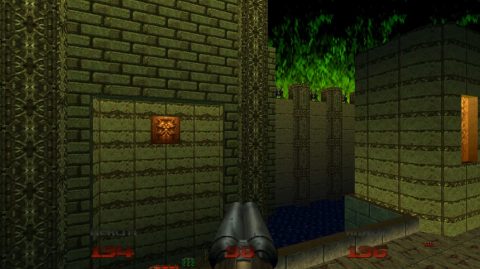 Dash back to the walkway and go through the center to the temple. Kill the Barons of Hell on the platforms on either side. Go up the stairs, run across the bridge to the Mega Armor and just keep running as the room opens up around you.

Kill the Demons and then the Barons of Hell. Press the Button on the pillar in the corner to lower down the Blue Key. Grab it and then kill the Arachnotrons in the next room.

Go back to the walkway around the temple and enter the Blue Door. Inside you’ll find the Red Key. Watch out for the crushers that activate once you have the key.

Make your way around to the other side and go through the Red Door. Take out all the enemies and approach the Yellow Key. When you get close it will disappear and a Baron of Hell will appear. This happens three times. Eventually you can pick up the Yellow Key at the end of the room.

Secret #2 can be found by opening the wall on the south side. Inside you’ll find a box of Rockets. The Exit is here but you’ll need to find a way to lower the bars so you can reach it.

Go into the temple, up the stairs, and this time open the Yellow Bars. Dash across the gap into the room beyond and take out all the enemies. 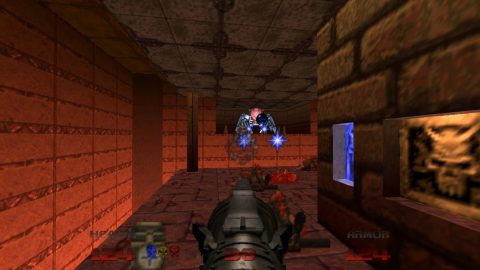 The central pillar has three colored Buttons on it. Before you press them go through the side without a Button. This takes you up to the ledge that had the Arachnotron for Secret #3 where you’ll find a Supercharge.

To unlock the bars in the various rooms you’ll need to press the Buttons in the right order. There are three sets of colors. The first is Red, Blue Yellow. Dash out of the room and back into the room to reset the Buttons.

The second code is Yellow, Red Blue, and the third is Blue, Yellow, Red. Head across to the room on the opposite side of the temple and press the first Button. The bars should be lowered now so you can get access to it. This removes one of the bars in front of the Exit.

The next Button can be found by dropping off the edge of the walkway and entering the building to the east. Take out the Arachnotrons and then ride the lift up. Press the Button to lift up a walkway and then press the Buttons in both the small rooms. 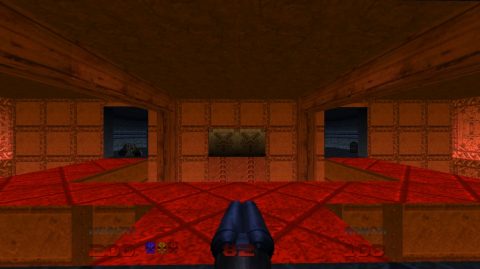 This will lift up the pillars so you can dash around to the back of the central structure. Press the Button around the back and get ready to kill a few Cacodemons. Dash down to the walkway below without falling in the lava below. Press the Button to lower the second bar blocking the Exit. Take the teleporter back up to the top. Take the pillars around to the other side and drop down to leave the room.

Head back through the Red Door and press the final Button here to lower the last bar. The Exit should be open now so press the Exit Button to finish the level.