This is quite a tricky map as there’s 7 secrets to find and lots of enemies to deal with along the way. From the Start head out one of the doors to the left and right and clear out both sides. Go to one side of the balcony area and back to the other and a Secret will open up.

Once you’ve cleared out both balconies the center will fill with Demons. Once you’ve killed them all the way down to the west will open up. Go down the steps and open the door into the next building.

Take out the Imps and steps will rise up on either side. Before hitting the Buttons on either side step forwards and then step back again. Secret #4 will open up with Mega Armor. 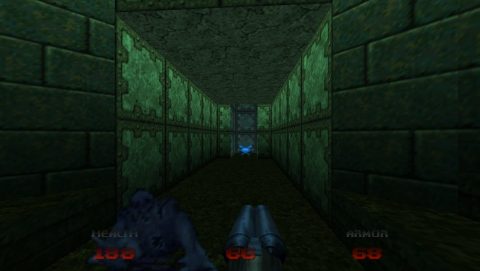 Take out the Hell Knights and press the Button on the wall on the south side before dropping down to the courtyard. More enemies will have spawned in so take them out and go back to the Start.

Head up the stairs on the other side and go down the next set of stairs. Press the Yellow Button on the wall to lower down the bars so you can get to the Yellow Key. 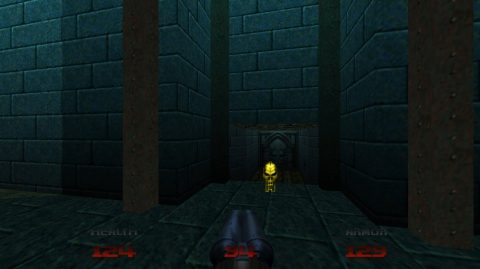 Continue around to the Yellow Door and go through to the large room with the river. Take out the Specters and head up the steps to the left. Take a look at the carving on the wall to the right and press on it. The eyes should open and close. Go back down and pick up the BFG from the other side of the room. This is Secret #7. When you pick it up 3 Mancubus appear behind you.

Go back up the steps and follow the river around to the 2 Barons of Hell. Take them out and press the Button on the wall. Go through the teleporter and go up to the small alcove on the north side of the room. Press the Button that lifts up to lift up the Exit Buttons back in the starting room.

Make your way back to the Start and press one of the Buttons to complete the level.