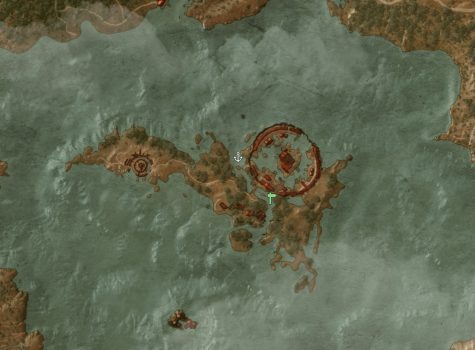 If you accepted Keira’s request to help remove the curse on Fyke Isle make your way to Keira’s moored boat, or any other boat, and sail to the isle.

Land anywhere on the isle and make your way towards the tower. This isle is infested with monsters so you’ll need to fight your way through. You may also notice black clouds of flies from time to time. You can use Igni to disperse them.

There are three locations outside the tower where you can speak to the spirits. Make sure you have the Magic Lamp in hand and approach one of the green mists. Stay still as the scene plays out. You’ll get 50 XP for watching each one.

Make your way through the outer barricade and into the rat-infested tower. Make your way up to the top, stopping to listen to the ghosts as you go along.

Once you reach the top Keira will ask if you’ve found the Mage’s Lab. There must be a hidden entrance. Pull the two Levers. They both have to be in the right position. Play around with them until the passageway is revealed.

Make your way up to the lab and you’ll meet the ghost of Anabelle. She’ll tell you how the mage was experimenting with rats to find a cure for Catriona. Peasants came and killed everyone but the mage gave her a sleeping potion. She was left for dead and the rats eventually ate her.

Geralt thinks the curse is centered around her and that she must forgive Graham for leaving her. Anabelle asks Geralt to take her bones to Graham so he can bury them.

If you agree to take the bones to graham either sail back to Oreton or use the fast travel signs. Speak with Graham in his hut and give him the bones. After you leave you’ll hear a scream. If you run back you’ll see Graham dead on the floor surrounded by rats. The spirit was a Pesta, or Plague Maiden, and now she’s loose in Velen.

If you refuse Anabelle’s request she will attack you on the way out, revealing herself as a Plague Maiden. You can fight her but you won’t be able to kill her until the curse is broken.

Return to Keira to find out what to do. She tells you to go and see Graham in Oreton. Graham will come with you to Fyke Isle to see Annabelle and convince here of Graham’s love. She forgives Graham and after a kiss he dies. The two are together again in death and the curse is lifted.

Whatever path you choose return to Keira and let her know the outcome to complete the quest.