Wild at Heart is a secondary quest that can be picked up by reading the notice boards at either Inn at the Crossroads, Midcopse, Mulbrydale or Crow’s Perch.

Make your way to Blackbough and speak to Niellen. He’ll be in front of one of the huts speaking with his sister, Margrit. The two of them will give you some details about Niellen’s missing wife including a few people to speak to and a location to investigate.

Use the quest markers to find the relevent people to speak to. One is the butcher’s wife and the other is the blacksmith. The blacksmith’s children also have some information about the day Hanna disappeared.

Make your way to the location in the woods and use your Witcher senses to investigate. You’ll find a corpse surrounded by a pack of Wolves. Once you’ve dealt with the wolves Margrit will appear and attemp to dissuade you from investigating the disappearence. You can either accept the bridge and lie to Niellen or continue with the investigation.

Assuming you continue to investigate you’ll find the corpse of a dog and then a bloody mess that Geralt thinks must be Hanna. He concludes that this is the work of a Werewolf.

Look around until you find some scratch marks. Follow the trail to a stone with scratches on it by a tree. Around the back of the tree you’ll find a tuft of fur. Geralt can now follow the werewolf’s scent. 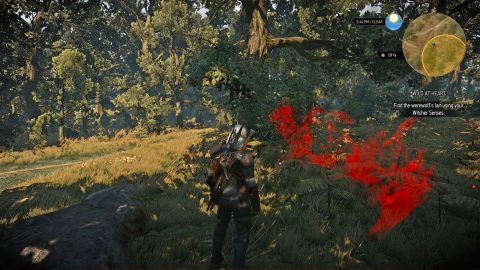 Follow the trail to a shack with some torn clothes out the front. If you enter the shack you’ll find some Mysterious Notes with more information about this quest.

Leave the shack and use your Witcher senses to follow the trail to the entrance to a lair underneath the shack. You’ll need to use Aard on the door to break it open or just hit it with a weapon. 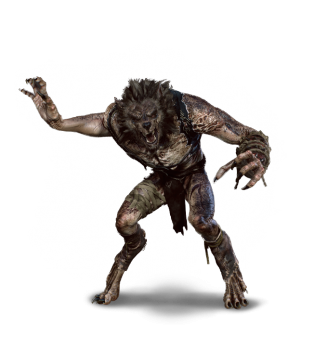 If it’s not nightfall you’ll need to meditate inside the cave to wait for the werewolf to return. When it does come back it will be accompanied by 3 smaller wolves.

Try to take out the three smaller wolves before dealing with the werewolf. It has a strong attack that can stun you even when you’re parrying. It’s best to dodge out of the way and strike back with quick attacks.

Werewolves are susceptible to Moon Dust, Devil’s Puffball, Cursed Oil and Igni. When this werewolf gets down to about half health he will howl and then start to regenerate health. Get in a few heavy attacks or use bombs or signs to weaken him.

Once the werewolf gets to low health Margrit will run in and stop the fight. The werewolf is Niellen and Margrit knows about it and has secretly loved him for a long time. She brought Hanna to see the Niellen but he slaughtered her as a werewolf. Niellen is so disgusted that he wants to kill Margrit right there.

Once the werewolf has been defeated you can loot his body for the Key to the chest in his shack. You’ll also find some rare werewolf ingredients.