Missing Brother is a high level quest (Suggested Level: 33) that can be started by reading the notice board at the Inn at the Crossroads and then speaking to Bruno inside or finding the mine directly.

If you speak to Bruno directly he’ll tell you that his brother, Mikel, led a few women to shelter in the mines so that they could avoid the war. He hasn’t returned but Bruno insists he is still alive.

Use the map marker to make your way down to the mine. Outside you’ll find some bloody body parts and monster tracks heading inside the mine.

Follow the tracks into the mine and explore the area. There are a few forking pathways here. First you want to go under the wooden arch where you’ll find other bodies. Climb up the ladder to find the only survivor. Talk to her and then search around for a Lever that will lower a bridge so she can escape.

Make your way back to an underwater tunnel. Swim through and search for tracks on the other side. You’ll come across some eggs. Geralt can examine them to find out you’ll be dealing with a Venomous Arachas.

Destroy the eggs with Igni or Aard and then follow the tracks to another cavern with another set of eggs and an Endrega Worker. Head back to the tunnel and continue on until you find the last set of 4 eggs. Get rid of them and then the Venomous Arachas will appear. She’s called Harrisi. 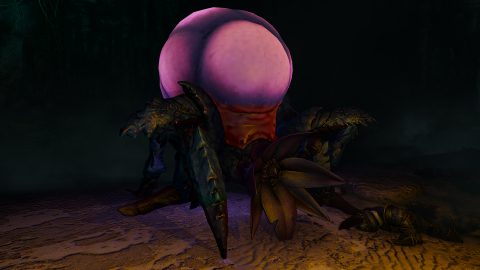 Harrisi is susceptible to Insectoid Oil. You should also take Golden Oriole before the fight as this will make you resistant to poisoning. Tawny Owl will also be helpful in regenerating Stamina quickly during the fight.

Stay out of reach of Harrisi until she releases a toxic gas cloud. You can see when she’s ready to release the gas as the sac on her back will fill up. She will also send out a web to pull Geralt closer. Quen and Igni seem to work well against her.

Once Harrisi has been defeated take the Arachas Trophy and return to Bruno to give him the news. He won’t want to pay you because you didn’t bring his brother back alive but you can convince him otherwise if you wish.