Patrol Gone Missing is a contract given by the Quartermaster at the Nilfgaardian Army Group Center Camp (south-east corner of Velen). Speak to the Quartermaster, Tavar Eggebracht, to find out that he sent some scouts out to have a look around but they haven’t returned.

Head out to the location marked on your map to the west of the House of Respite. You’ll find a campsite with some tracks nearby with two sets of prints. Armoured soldiers have been here but also a group of people going barefoot.

Follow the tracks until you find a corpse and some green goo. Geralt will determine that a Wyvern is in the area. Use your Witcher senses to follow the trail of green goo until you spot the Wyvern. 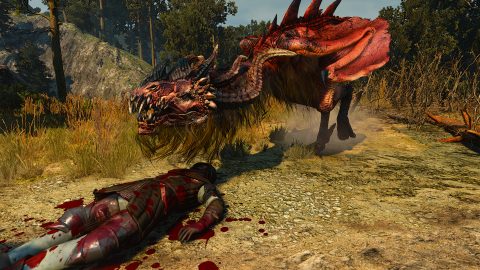 Wyverns are immune to stun and poison effects but are susceptible to Ornithosaur Oil and Silver. If the Wyvern is flying towards you use Aard or a crossbow bolt to knock it out of the air.

Once you’ve dealt with the Wyvern continue looking around to find some bodies that the Necrophages have dug up. Follow the trail of blood to a cave and a Ghoul’s nest. Go inside to find yet more bodies but these are not Nilfgaardian. It seems the Nilfgaardians had gone out into the woods to kill Redanian prisoners before running into a monster in the swamp.

Return to the Quartermaster to complete the quest. You can either accept payment or refuse payment for a few extra XP.

Back: Mysterious Tracks          Next: Phantom of the Trade Route