Jenny o’the Woods is one of the more difficult quests for mid-level characters. It has a suggested level of 10 but waiting till at least level 14 is recommended.

The contract can only be picked up from the Midcopse Notice Board. Once you’ve read it go and speak to the ealdorman about it. He will tell you to go and see Agneta who ran off when the beast appeared. She mentioned that it appeared after twilight which is a clue.

Make your way out into the fields where the beast was spotted and use your Witcher senses to find a torn piece of fabric and some tracks. Follow the track to a pool of blood and an Assassin’s Knife. Continue following the tracks until you find a shallow grave and a Letter.

Read the Letter and head back to the ealdorman to let him know what you’ve found. He’ll work out that a woman named Zula was murdered and has now turned into a Nightwraith.

When you’re ready to face the Wraith head out into the woods and meditate by the fire until nightfall. 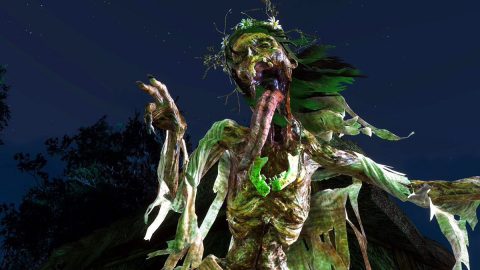 When Jenny appears you’ll need to cast Yrden to be able to hit her. When she loses a bit of health she’ll spawn three copies of herself and they will drain you while replenishing her own health. You’ll need to kill the 3 copies as quickly as possible before she recovers all of her health. Repeat this process until you defeat her.

Loot the body for the Nightwraith Trophy and a Forgotten Vran Sword. Then head back to the ealdorman for your contract reward.