To begin this quest you must play the Bloody Baron in the Crow’s Perch. He uses the Northern Realms faction. Once you beat him he’ll give you the Sigismund Dijkstra card and suggest you try to beat three of Velen’s best players, Haddy, Old Sage and the Boatwright. 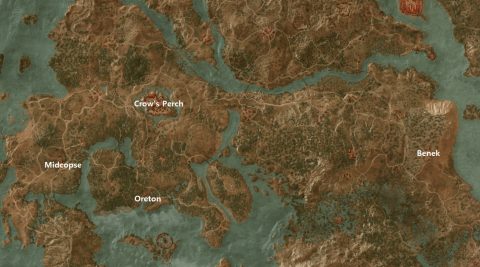 If you don’t play the Bloody Baron before the Return to Crookback Bog quest then you can find his Cards and the list of other players in his office. The other three players can be played in any order.

Haddy: This young boy can be found in Midcopse and plays with the Northern Realms deck. Once you defeat him he gives you the Vernon Roche card.

Boatwright: The boatwright can be found in Oreton, probably working on one of the boats. He uses the Nilfgaardian Deck. Once you defeat him he’ll give you the Letho of Gulet card.

The Old Sage: Is found in Benek, on the eastern side of Velen. He plays the Monsters deck which can be difficult to deal with as some monsters draw other monsters from the deck onto the battlefield. Once you defeat him he’ll give you the Crone: Weavess card.