Return to Crookback Bog begins if you agree to help the Bloody Baron (Phillip) take back his wife from the Crones. Head to Downwarren where you’ll meet the Baron and his men. When you tell him you’re ready everyone will start moving towards the orphanage. Make sure you stay within 150 meters of the group or the quest will fail. 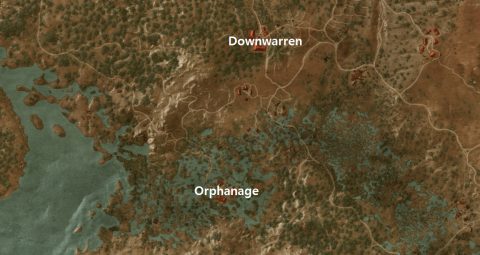 When you reach the huts in the swamp you’ll see a group of Witch Hunters fighting off Drowners. If you’ve previously seen Phillip’s daughter Tamara then you’ll recognize her as one of the Witch Hunters.

After an awkward reunion with Phillip and Tamara the Witch Hunters will split up to search the huts. What happens to Anna will depend on how you completed The Whispering Hillock. If you saved the Spirit so that it could rescue the orphans than the Crones will turn Anna into a Water Hag as punishment. If you killed the spirit than Anna will go mad after the Crones eat the children.

Whatever the case the Crones will send a wave of enemies to finish you off. You’ll be attacked by Drowners and Water Hags followed by a monstrous Fiend. 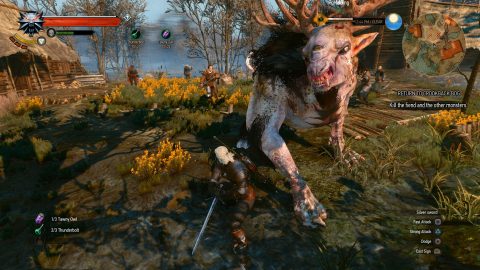 The Fiend has a third eye which it uses to hypnotize its prey. You can roll out of range of the hypnosis by rolling twice away from the Fiend. A Cat Potion will make you immune to the third eye hypnosis or you can throw a Samum Bomb at the third eye to deactivate it.

Once the Fiend has been defeated a short cut-scene will play. The path from here depends on what has happened to Anna.

If Anna has gone mad Phillip will decide to take her to the Blue Mountains in hopes of finding a cure. Tamara wants to go with them but Graden will remind her of her duty to stay with the Witch Hunters. When you return to Crow’s Perch you’ll see some of the Baron’s men robbing one of the peasants. The Sergeant has taking over the town and doesn’t care too much for the lower class.

If Anna has been turned into a Water Hag Tamara will ask the Witcher to help her. Geralt can’t lift the curse without knowing what caused it so decides to ask the little godling, Johnny, for help.

Follow the map maker to Johnny’s burrow. After calling for him to come out it seems he’s not at home. Use your Witcher senses to track him down to a small camp. Talk to Johnny to find out exactly what happened to Anna.

Make your way back to the orphanage and climb down into the cellar where you’ll find four Dolls. They have been used for magic but which is the right one for Anna?

The correct doll is the doll with the violet hollyhock bloom which the Baron mentioned was her favourite flower. If you pick this doll the curse will be lifted but the Crones have tied the curse to her life so she will still die soon. At least she will have a moment of sanity with her family before death.

If you pick any of the other three dolls Anna will burst into flames and die. However Anna dies when you return to Crow’s Perch you’ll see that Phillip has hanged himself in the courtyard.