Hazardous Goods begins when you meet a man trapped under a cart on the road between Lindenvale and Lurtch. This quest can’t be completed while the Ghosts of the Past quest is active. 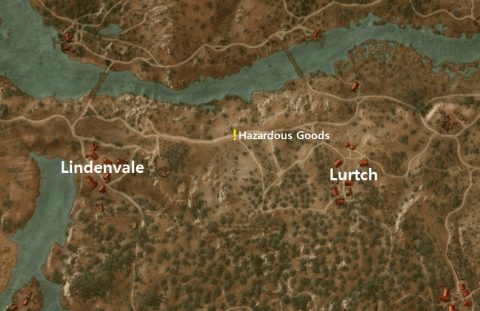 When you arrive at the scene you’ll see a cart full of dead plague victims with Ghouls running around. A man is trapped under the cart. Kill all the Ghouls and talk to the man whose name is Gert Borel.

Gert tells you that the axle of his cart broke and the horses got spooked when the Ghouls started howling. You can either leave now or convince him to burn the cart and the bodies. Use the Igni sign to set fire to the cart.

Geralt will also tell Gert to burn his clothes and give himself a thorough scrubbing down.

Whether Gert listed to Geralt’s advice or not I’m not sure but regardless you can find him a few weeks later between Reardon Manor and Benek. He did indeed catch the plague and asks you to kill him before he suffers too much. You can either comply or leave him be. There are no repercussions for either choice.