This quest is located south of the bridge to the Border Post on the Velen side of the river. Speak with Albin Hart in the battlefield and he’ll ask you to defend him and his men while they scavenge for loot. 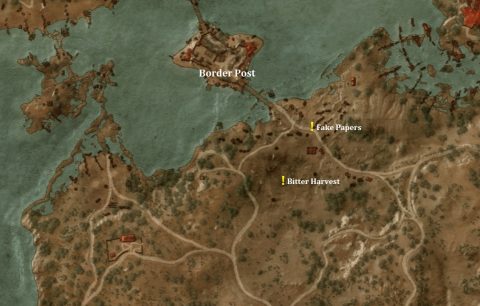 If you accept the quest waves of Ghouls and Rotfiends will spawn. The first two waves have 3 Ghouls each, the third has 2 Ghouls and a Rotfiend and the fourth has 3 Ghouls.

Try to protect Albin during the waves of enemies and stay to the south of the men, closer to where the enemies are spawning so they will attack you and not the looters.

Once the quest is complete return to Albin for your reward of 50 Crowns. If he dies ask one of his men for a reward and you’ll be given 20 Crowns.

If you have protect the men and would like a pass across the bridge you can talk to the Shady Merchant for a Fake Pass. You will also be given a Pass if you follow the main storyline through the Family Matters quest.