To the east of Lindenvale you’ll find a small town called Lurtch. Just to the southeast of the signpost you’ll find 3 Bandits roasting a hog. They’re so happy about the kill that they’ll offer you some. Whether you accept or not a guy called Yontek will run over and try to stop them, saying they’re eating Yagoda. 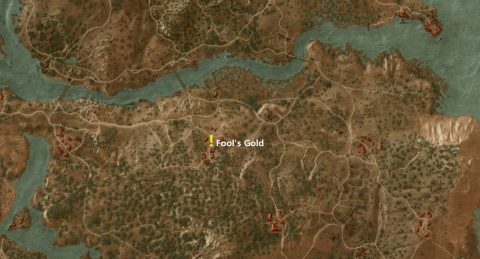 As the Bandits are preparing to kill Yontek for disturbing them you have a timed response, you can walk away or intervene. If you intervene you’ll have to fight the 3 Bandits.

Talk to Yontek to find out that others in the village have been taken by what he calls “piggy magic”. Head into the nearest hut and use your Witcher senses to see that the pigs are indeed magical.

Talk to Yontek and he’ll give you the hog hut Key. The directions he gives you are pretty vague but you can use the map marker to go to the location. Make sure you take out the Nekkers and Ghouls along the way because you’ll be escorting the pigs back once you find them.

Outside a cave you’ll spot 3 Bandits. Take them out and then enter the cave to deal with another 4 Bandits. Use the Key to open the door. It will transform to look like a portal but you can just walk through it.

Use your Witcher senses in the hidden chamber to see lots of footprints. Follow them in to find a pig with clothes nearby. Talk to the pig to find out it’s the missing herbalist, Igor.

Continue to the back of the temple and you’ll see some large statues with pedestals. Examine them to discover they once held gold. Go back and talk to Igor about the gold. He can’t say much as a pig so return to Yontek and ask him about it.

When you get back to the village you’ll need to take out the Wolves before you can talk to Yontek. He’ll tell you that the villagers stole gold from the temple and were cursed. He was spared because he didn’t go with them. He agrees to collect up the gold while you round up the pigs.

Herd up all the pigs in the huts, using the Axii sign on them, and lead them to the cave. Even if took out all the enemies beforehand a few Nekkers will still rise up to attack. Dispense with them and continue to the cave. 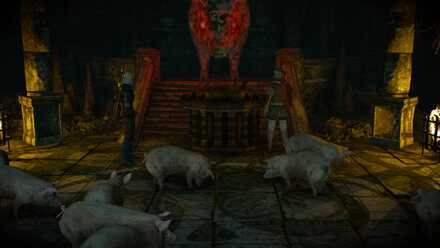 Once you reach the cave you’ll see a cut-scene of the curse being lifted and the pigs transforming back into villagers. They’ll blame Yontek for their misfortune and you’ll have to decide to step aside or defend him. If you defend him they’ll back off but you’ll miss out on your 100 Crowns reward.