The conract for this quest is posted on the Crow’s Perch notice board. If you find the Shrieker’s cave while you’re wandering around this quest will start automatically.

Talk to Chet near the entrance of the village. He’ll tell you about a hunter who tried to take down the beast but was killed by it instead. Chet is looking after his son, Symko, who may have seen the beast.

The son is understandably in shock over the loss of his father so once he starts to talk about the beast he’ll get upset. You can cast Axii at the end of the conversation to calm him down.

Leave Crow’s Perch and then walk to the east. When you come across the dead dog use your Witcher senses to find some tracks. Follow the tracks to some blood and then follow the trail of blood up a hill and around some ruins. The tracks eventually lead into a cave. Examing the tracks along the way Geralt will determine the monster is a Cockatrice.

Enter the cave and you’ll hear the Shrieker but it’s up to high to reach. Throw a Dancing Star, Grapeshot or Samum bomb up to the monster’s hiding area. The Shrieker will fly out of the cave.

Chase the Shrieker out of the cave and it will turn around to fight you. It’s sensitive to Ornithosaur Oil and is resistant to poison and knock down effects. 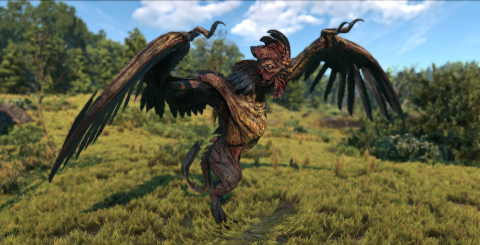 Once the beast is dead take the Cocatrice Trophy from the body and return to Chet to complete the quest. You can either request payment or let him keep the coin to help out with looking after the orphan.