Face Me if You Dare!

Just a little way south and east of the entrance to Crow’s Perch you’ll come across a man with a deathwish. He’ll challenge you to a duel in honor of the Maid Bilberry. 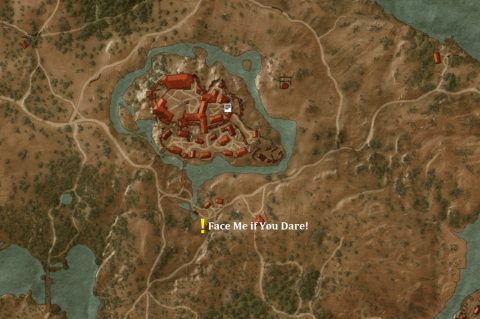 No matter what you say to him he won’t give up his quest to defeat 100 knights for his lady so you’ll be forced to fight. Once his health is down to about 25% he’ll yield.

It’s not over yet because he can be found later outside the Tretogor Gate leading into the city of Novigrad. This time he’ll be better prepared with a shield and armor. You’ll be drawn into a fight once more so beat him down to 25% and make him yield.

A few days later he can be found inside Novigrad in the Silverton district which is the north-western part of the city. This time he’s brought a few friends with him. You can either fight him, tell him you don’t want to fight which will still end in a fight, or use Axii to get him to back down. However you end the final confrontation the quest will be complete.