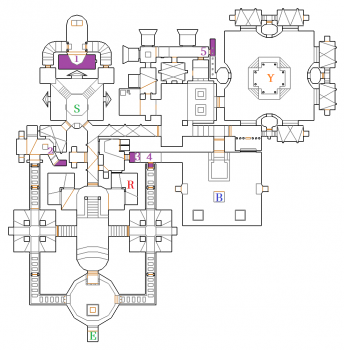 The room in the middle has a Super Shotgun. When you pick it up Secret 1 will open with a group of Imps. If you get overwhelmed go through the teleporters which take you back to the starting room. Inside Secret 1 you’ll find a Backpack and Berserk Pack. 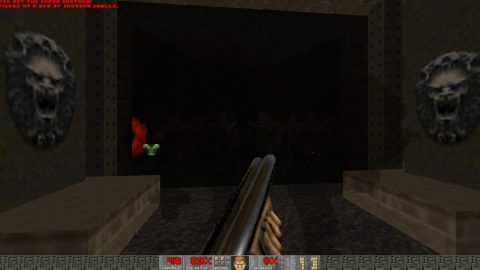 This is the room with the SoulSphere that you saw earlier. Lower down the pillar and grab the SoulSphere. Ride it up and dash across to a dark ledge with an Imp. Dash across and open the back wall for Secret 2 with a BFG.

When you drop down a room will have opened releasing a Baron of Hell. Take him out and then go back through the teleporter. 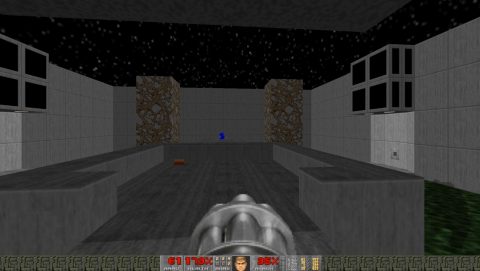 Head up the steps and run across to the Blue Key. The two pillars will lower down revealing two Hell Knights. Take them out and then explore the passages to the west to find Secret 3 and Secret 4.

Head back out the way you came in and open the Blue Door to the east. From here you’ll be able to look out to the large courtyard beyond the Red Door. In the center is the Yellow Key which you’ll pick up later. For now just snipe off a few enemies and let them fight among each other. 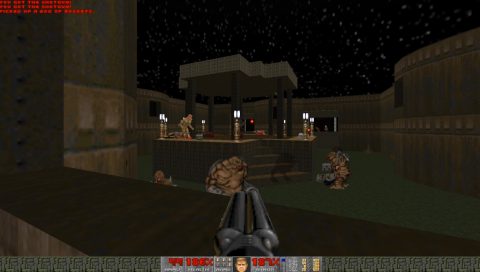 Make your way around the outskirts of the courtyard by taking the teleporters from one corridor section to the next. When you’ve cleared out the area head back to the corridors just past the starting room and open the Blue Door to the south. Snipe out the Imps and then walk up the steps.

To get to the Red Key you’ll need to dash across to the platform on the eastern side of the stairs. The wall behind it will open up revealing some enemies but also allowing you to pick up the key.

The platform on the other side works just the same but there’s only enemies and a bit of loot.

The doors to the east and west open up to a sewer area with square rooms and corridors. To make life easier kill all the enemies on both sides and take out all the enemies in the southern circular room beyond the yellow bars. Make sure you don’t hit the Arch Vile or he’ll wake up. 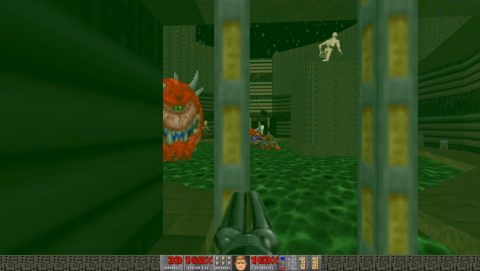 Head back to the room where you picked up the Red Key and go into the lift on the south side. Press the Button and the bars around you will lower. From here you can use the Rocket Launcher to get a shot or two off on the Arch Vile. He usually teleports into the room behind you but sometimes he just drops down.

Wherever he ends up go and finish him off and then take the main corridor to the east and go through the Red Door.

Most of the enemies should be dead in this courtyard but finish off whoever remains and then pick up the Yellow Key from the center.

Head back to the circular room with the Arch Vile and open the Yellow Bars. When you cross over the wall around the pillar should lower. Press the Button on the pillar to open the wall to the south. Take out the Revenant and then head into the teleporter to complete the level.