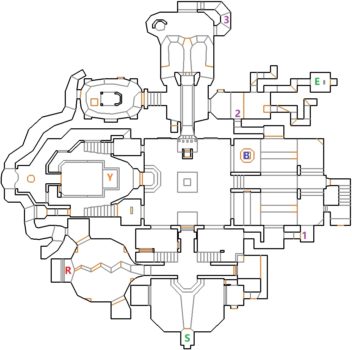 From the Start walk across the path and kill the Gunners on the right. The windows on the left and right side of the slime room will open. Go back and shoot a few rockets into each window to kill all the enemies.

Go back to where you killed the gunmen and open the wall at the end. You’ll look down on a room with Specters and a Hell Knight. It’s easier to take them out now. 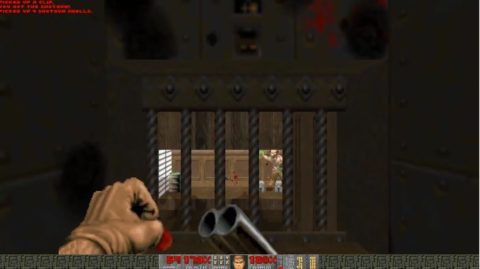 Turn around and walk along the path on the other side. When you’re on the third step going down the door behind you will close shut for 30 seconds. Run forwards and grab the Red Key. The wall behind it will open as well as a hole on either side of the room. Use a BFG to quickly take out the Imps behind the key.

When you’re done go up the stairs to the Red Door. You can take out the Specters behind the cage before you enter. Press the Switch to reveal a lift in the other room. Go back down the stairs and up the other side. Press the Button to take the lift down to the area where you killed the Hell Knight.

Press the Button to lower another lift. Take it up and press another Switch to reveal a Button and press this Button to open the door to progress further into the map. 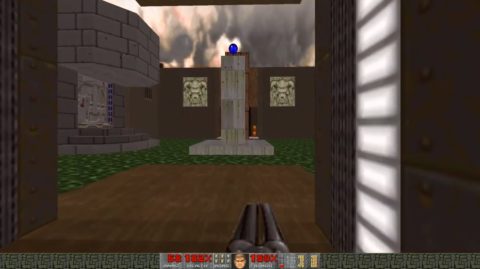 Press the Torch in the corner to open up the wall at the end of the passage between the two rooms. Go through for a Mega Armor. Hit the Button and it will raise up a bridge in the southern room. Cross the bridge to the other side and then run back because on both sides Cacodemons will be released.

Take them out and then go back to the bridge. Stop just before you get to the trench. Hit the Button on the right side of the trench. You can drop down into the trench to hit it but it should still work if you’re standing above it. The trench will raise up and with it a Pain Elemental. Use the Chainsaw to take it out

On the left (south) side of the bridge is a hidden switch. Drop down or press it from above if you know the right location. The platform will lower down revealing Secret 1. There’s just a few Armor Bonuses here. Take the lift back up and drop down to the rooms with the bridges. The bridge in the northern room has also lifted up. You can now run across to grab the Blue Key.

Head back to the square outdoor area and go through the Blue Door on the western side. Take out all the enemies around the sides

Take out all the enemies in the rooms up the stairs and then walk backwards up the stairs on the left side. A wall will open with a Soul Sphere inside. Quickly run down to pick it up and a Button lifts up. Press it to open up a passage on the other side. 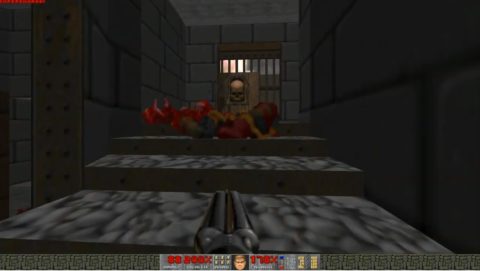 Head back up the stairs and through the passage. This time turn left at the pedestal with the heart on it and drop down to the area with the Arachnotron. Quickly dash across to the Yellow Key, turn around and take out the spider.

Go back to the slime pool and open the Yellow Door to the north. Hit the Switch to lower the yellow bars and go through. Take out all the enemies, including the Revenant in the small cage. Walk across the path but be prepared for the wall ahead to open once you step on either of the side paths. 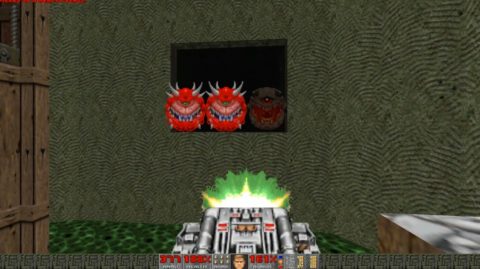 Use the BFG to take out the floating enemies. Walk back along the bridge and hit the Secret Button. It’s located just at the beginning of the bridge. If you can’t find it drop into the slime and lower the bridge. You’ll see the Button on the wall on the south side of the bridge. This opens a secret passage on the eastern wall. Dash across to it for Secret 3 and a BFG.

Drop into the slime and lower the bridge. Head along the path to the left (west). The teleporter takes you to the top of the pillar in the slime pool with the Soul Sphere.

Go through the door and take out the Chain Gunners and Arch Vile in the cage. Hit the Skull Button at the end of the path to open up an area on the eastern path.

Go back along the bridge and head along the eastern path. Take out the enemies and press the Button to lower the lift. Watch out for the Arachnotron at the top.

The passages in this area will open up as you go through them. Walk to the end of the first passage and another will open up. Continue until you reveal the level exit but don’t go through it yet.

Head back down the lift and watch out for the gap in one side of the wall. This is Secret 2 on the map, and inside you’ll find the Mega Sphere. Make your way back up the lift and head through the Level Exit.