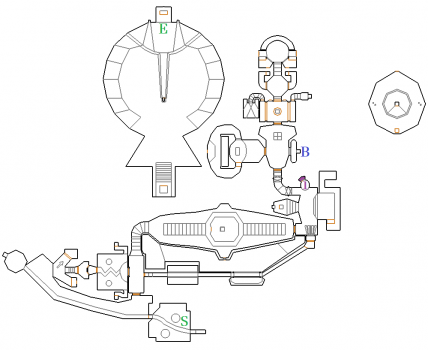 Geryon is an easier map than some of the previous levels. There’s more open space, lots of ammo and a more linear level design. From the Start pick up the Shotgun and Health Bonuses and then drop down through the opening on the western side.

Follow the blood river to the west and pick up the Backpack from the cave. Come back and head through the door to the north. The doors to the right and left are optional areas. If you clear out the area to the left you’ll find a Chainsaw and Blue Armor. The thin corridor to the right leads to a couple of Shotgun Guys guarding a Chaingun.

Head up the stairs to a room with large steps up to a central platform. Do a loop around the stairs to take out any guards and then open the door to the south. This leads to the small outdoor area. Watch out for the Mancubus in the open area and the Revenant in the cave to the west guarding a BFG. When you’re done go back inside and up to the platform.

Shoot the Imps from the side and then press the Switch. You can reach it without falling in if you stand on top of it and turn to face it. This lifts up the slime pool so you can reach the SoulSphere on the pillar. 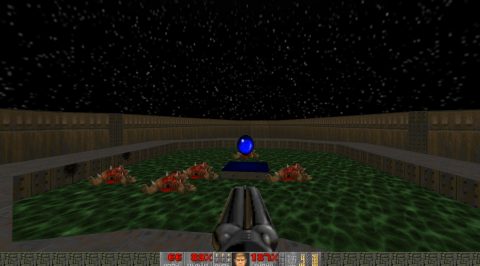 Go down the steps on the other side and through the door to the east. Clear out the enemies around here and then open the wall in the little alcove between the two lamps. This is Secret 1 and Secret 2. Inside you’ll find a Computer Area Map.

Open the wall to the left and run around the slime canal to the right. Press the Button on the wall. This opens up the wall to the Blue Key but also opens the wall behind you. Take out the enemies and then follow the loop of the canal back to the previous room.

Head out the door and you’ll see the door across from you is open so you can grab the Blue Key. 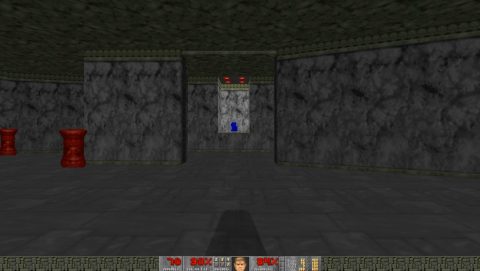 Go through the Blue Door to the north and pick up the Rocket Launcher. This is an obvious trap and windows will open on either side of the room. I like to use the BFG to take them out quickly.

There is a door in the center but press on one of the faces to lower down the ledges so you can get to the side rooms. The one on the right has a Baron of Hell guarding a Plasma Gun. The one on the left has 2 Revenants guarding a Berserk Pack.

Open the door to the north and take out all the enemies behind the bars. Take the lift up on the left and press the Skull Button. This opens a passage on the west side in the previous room for a few seconds. Quickly run through and hop onto the teleporter.

Press the Face Button to lower the central wall. Take out the Baron of Hell and other enemies and then pick up the MegaSphere. Press the Switch on the wall and go through the teleporter. Get your BFG ready. Run forwards and use the BFG to take out most of the enemies in this outdoor area. Just watch out for the 2 Revenants hiding on either side of where you teleport in. 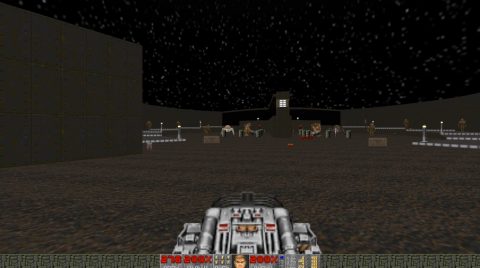 Head up the steps on either side and take out the Hell Knight in the center. Press the Button to lower the wall to the north. Take out the Arch Vile and head through the silver teleporter to the Exit.