The Path of Warriors

The Path of Warriors only becomes available once you’ve completed The Tower Outta Nowheres. You can start this quest by talking to either the Skellige Women in Urialla Harbor or Gunnar at the Trail to Yngvar’s Fang. 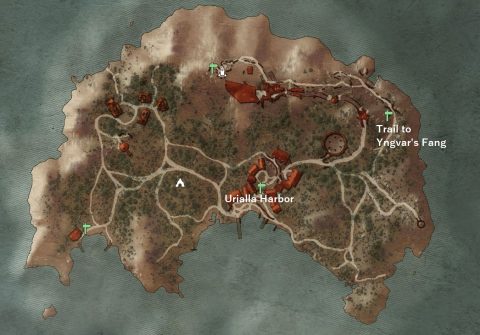 Proceed to the Trail to Yngvar’s Fang and talk to Gunnar who will tell you about completing the trail. There are two parts, reach the top of the mountain and retrieve the token, then enter the cave and retrieve the item at the end of it.

Continue along the trail and make your way to the top of the mountain. You’ll be attacked by a Harpy and Sirens. When you’re in combat you’re no longer able to climb so this combat is a little bit awkward if you start combat while standing on a small ledge. Kill them off and continue along the path.

At some point you’ll come to a section of broken stairs. It’s too far to jump so slide down and make your way around the other way.

Along the way you’ll pass by a man outside his hut. Continue to the top and take the Token from the totem pole. There’s also a Place of Power here.

Take the other path down and enter the cave. Swim through a long tunnel and pull up for air. You can climb onto the land here but you’ll only face 2 Gargoyles. Dive down and continue along the next tunnel. Along the way you should be able to pull up out of the water for the second Token.

Continue swimming along the tunnel until you reach the other side. Outside of the cave you’ll be attacked by Bandits. Take them out and then return to Gunnar. He’ll be impressed that a foreigner was able to complete the trail and give you the Diagram: Assault Gauntlets as a reward.