The Cave of Dreams

This quest can’t be started until you complete The King is Dead – Long Live the King as Blueboy Lugos will not be at the Cave of Dreams until after that quest is finished.

You can either wander around and find this quest yourself or be directed to complete it after finishing the Stranger in a Strange Land quest. Either way head out to the cave southeast of Holmstein’s Port. 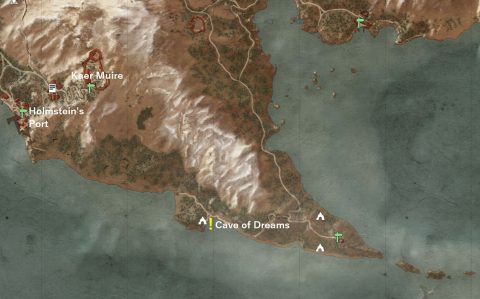 Approach the ship moored outside the cave and speak with Jorulf the Wolverine. He won’t let you board so you either have to force your way past him or cast Axii on him. Once he’s out of the way you’ll be able to speak to Blueboy Lugos.

You’ll tell Blueboy that his father sent you and that he should hire a Witcher to help him with this quest. After being convinced he’ll bring you along and two of his best warriors as well.

Inside the cave kill the Nekkers and you’ll come across a totem. There you’ll eat hallucinogenic herbs to go into a trance. You’ll be transported, along with the crew, to a dream cave. 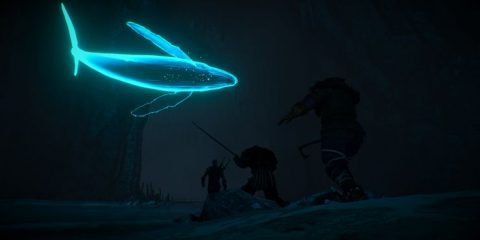 As you travel through the cave each of the members of the party will have to face their worst nightmare. First up is Uve who insults the ghost of King Bran. His worst fear is the fear of insulting the king. Kill the Spectral Warriors that appear and continue on your way.

The next fear belongs to Jorulf the Wolverine. You’ll face Ghostly Sirens who will tell Jorulf that he killed his father when he wrecked ths ship years ago. Defeat the Sirens and continue on to the next encounter.

Kill the Water Hag and make your way to the next totem. This is Blueboy Lugos’ fear. A burning ghost of Madman Lugos will appear and berate his son. Kill the Flaming Specter and move on to the final fear.

Geralt’s fear is last and includes the King of the Wild Hunt, Eredin. Battle Eredin and the Hounds of the Wild Hunt until everyone disappears except Eredin and Geralt. Eredin will tell Geralt that he wishes to take Ciri and see Geralt dead. Geralt will then wake up from the dream.

Blueboy Lugos will either free you from your debt if you told him about it or pay you for your services. The quest will end and Blueboy and his crew will have gone.