Make your way to Trottheim on Faroe Isle and approach the town through eather the east or west gates. If you don’t go through the gates the Pirates will immediately become hostile. 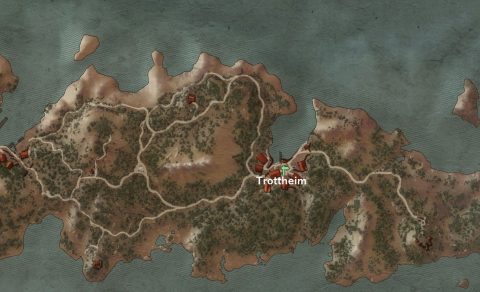 The Pirate Guards will assume you’ve been send by a Nilfgaardian named Ville. If you go along with it you’ll be taken to their Pirate Leader. If you correct them then the Pirates will become hostile and you’ll need to fight all of them.

Once you meet the Leader you can pay the 500 Crowns that was agree to take the slaves, use Axii, if you have Delusions Level 3, or reveal you’re not a slave trader at which point all of the Pirates will become hostile.

If you play along as a slave trader all the way to the end the Leader will agree to give you the Key to the Slave Cell. Unlock the cell and lead the group out through the western gate. Once you’ve rescued them they’ll thank you and give you the Diagram: Ban Ard Breastplate.

If you fight the Pirates you’ll need to find the Slave Driver’s body and examine it for two keys, the House Key and Slave Cell Key. Unlock the house and then unlock the Slave Cell inside to rescue the women.