The master boatbuilder Bjorg has posted a contract on the Kaer Trolde Harbor notice board for anyone willing to rid the bay of beasts. You can begin the contract either by reading the notice board, speaking with Bjorg directly or finding the cave with the monsters.

Talk to Bjorg to find out there’s a Drowner problem. He recommends you talk to two others, Rurik and Tove. Rurik is standing right behind him and Tove is a widow living in a nearby house. Both of them will tell you that someone they knew was taken, or disappeared, from the nearby cliffs. One of the missing men was found torn to shreds.

After speaking with everyone you’ll have two locations that you can investigate. Both of them will take you to a trail that will lead to cave.

Once inside the cave use your Witcher senses to examine the hallway. Look at the bones and then head to the next room where you’ll be attacked by Drowners. Look around and examine the Armor, Bodies and Wrecked Boat. Geralt will conclude that the creature is a Water Hag.

The Water Hag may not appear if she thinks you’re nearby so you’ll need to craft Drowner Pheromones to cover up your scent. The recipe will automatically be added to your list of recipes.

Craft the Pheromones, use them on yourself, and then find a hiding spot behind the wrecked boats. Eventually the Water Hag will appear with a group of Drowned Dead. 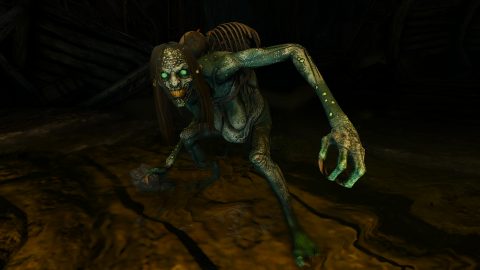 Once you’ve dealt with them loot the Water hag for the Water Hag Trophy & Mutagen, and a steel sword called Daystar. When you’re done return to Bjorg for your reward. If you don’t say anything he’ll give you 187 Crowns. If you ask for more becuase the creature was a Water Hag and not Drowners he’ll reluctantly give you 281 Crowns.