At the end of The Calm Before the Storm, while Geralt and Yennefer are in Freya’s Garden, Yenn will ask Geralt to meet her in Larvik. This begins The Last Wish quest.

Enter the Warriors Hall and speak to Yennefer. She’ll tell you about Amos var Ypsis, a mage who specialized in Djinns. She’s more interested in his Djinn than she is in Amos. You can talk to her a bit more about Djinns before agreeing to help.

Jog down to the boat with her and speak to her again. She will speak an incantation that will allow you to see wrecks on the seafloor. 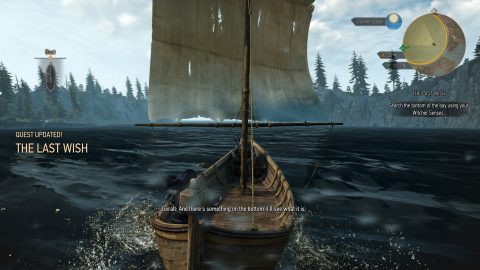 You’ll sail across the ocean as you talk about old times. Eventually you’ll come across an area that Yenn wants to investigate. Dive down and search the remains of a longship on the seafloor. Use your Witcher senses to look around. You’ll spot a figurehuead of Clan Drummond. This isn’t the vessel you’re looking for so swim back to the surface.

You’ll sail to another location so dive down and search around. You’ll find a War Horn with the sign of Clan Heymaey. This isn’t the right boat either but you can hunt around for loot if you wish.

You’ll continue sailing to a third location where Yenn senses something odd. Dive down to find a huge underwater crater. Swim around to find the remain s of a boat. Next to it you’ll find the Broken Seal. Grab it and return to the surface.

After Yenn has examined the broken seal she’ll open a portal and teleport both of you to the location of the other half. You’ll be on snow covered mountain.

While you’re here you can ask Yennefer why she wants the Djinn and about the link you two have together. She reminds you of the time you asked a Djinn to bind them together. She wants to ask this Djinn to undo that wish. She wants to know if the connection between the two of you is true even after the Djinns magic has gone.

Make your way with Yenn to the ship left atop the mountain. Loot the cabin of treasure if you wish and then head down to the hull to find a laboratory.

Use your Witcher senses to look around. You’ll find a trail of blood from a pair of shoes. Follow them to a bookcase. Interact with it to lift it up and find the body of Amos. Search the body to find the other half of the Broken Seal. 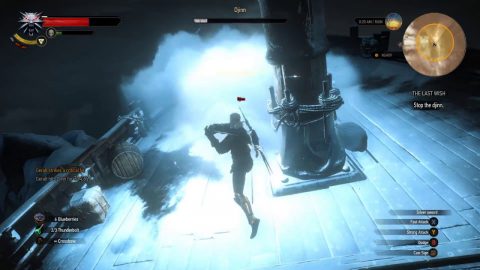 Now that Yenn has both halves of the Seal she’s able to summon the Djinn. She tries to control it but it’s too powerful. You’ll have to attack it to weaken it first.

Roll out of the way of its electrical attacks before rolling back towards the Djinn for a strike of your own. Once its health is low enough Yenn will be able to capture the Djinn and make her request. 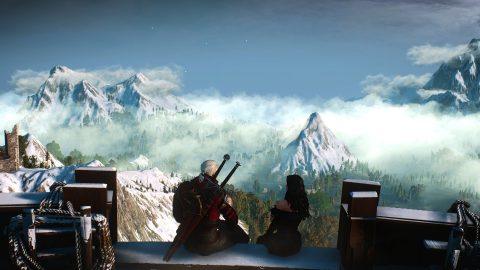 Afterwards you can choose dialogue options that lead to romancing Yennefer or take the stand of wanting to be her friend but nothing more.

If you chose to romance Triss during Now or Never and you say you want to be with Yennefer now you’ll lose both of them during the It Takes Three to Tango quest.