This quest can be initiated in one of three ways, talking to to Otto Bamber at the Herbalist’s Hut near Oxenfurt, talking to the Druid Merchant Yolar at Gedyneith or coming across the Gremist sitting outside his cave at Gedyneith. 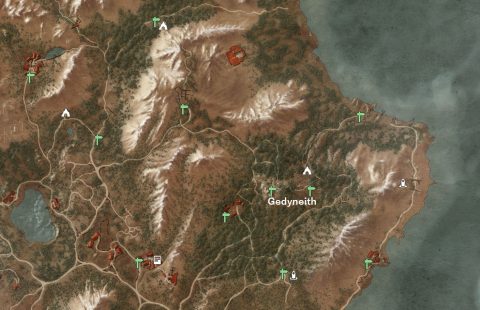 However you start the quest go and talk to Gremist. He’ll refuse to take you on no matter what you say but after a little persistence he’ll eventually agree to teach you if you help him complete three tasks.

Head south of the Druid’s Camp towards the Morskogen Forest and start looking around for Pimpernel bushes. You may find a few but all of the flowers have been picked. Use your Witcher senses and examine one of the bushes.

A Druid will approach and tell you that Gremist sends out many young druids to find the flower but they all return empty handed. The last druid, Ramund, hasn’t returned, so this druid came out to find him and slay the monster responsible.

Use your Witcher senses to find some tracks and follow them to a path where the tracks split off. One goes downhill and the other uphill. If you follow the track downhill you’ll come to an Armored Arachas near a pile of stones on a dead body. Once you kill the Arachas the Druid will tell you that the man was Jorre the White. It’s not the druid you’re looking for.

Follow the tracks uphill and you’ll eventually hear a male voice. It’s the druid Ramund. He’s safe and sound but fallen in love with a Succubus. The other Druid wants to kill the Succubus. 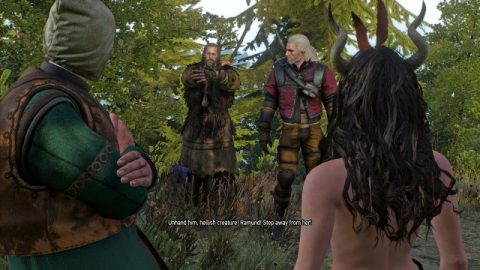 You can agree and kill the Succubus or tell him to stand down. If you let her live follow her to her lair. She’s decorated it with Pimpernel flowers. She’ll give you one as a show of thanks. If you killed the Succubus then you’ll need to follow her scent back to her lair to find the flowers.

Make your way to the distillery on Hail Hill. It’s long since been abandoned but the cave is inhabited by a Cyclops. Kill it and search the distillery for the Distiller’s Log and Distiller’s Letter. You’ll also need to find the Mash left up on the scaffolding.

To make the Spirit follow these instructions. Place the Mash in the evaporator (center vat), and then light the fire under it. Once Geralt says that it should be enough use the Right Lever and then the Left Lever.

Put out the fire and then retrieve the Alcohol from the barrel next to the condenser.

Fritjof can be found in Blandare where he’s helping the villagers by performing a ritual to make it rain. The ritual can be dangerous as it can summon monsters and he asks Geralt to help.

Go with the man to a field and an altar. He’ll sacrifice a sheep and the ritual will begin. Fight off the Foglets as they appear. The man’s dog will also help in the battle. You’ll first face groups of 2 Foglets but later on they’ll appear in groups of 3 or 4.

Once all of the Foglets have been killed the ritual will be completed and Fritjof will agree to go and see Gremist.

With all three tasks completed go back and see Gremist. He’ll still refuse to tell you about the ritual and tells you to come back and see him in 24 hours.

Apparently the “ritual” was more about getting drunk with an old friend than anything else. He agrees to teach you about Alchemy and Toxins and the quest will be complete.