This contract can be picked up by reading the notice on the Larvik notice board or by talking directly to Thorleif, the village elder of Larvik.

A strange beast has been attacking people on the main road to Larvik. Talk to Thorlief for more information. He’ll then ask you to talk to Sverre who was one of the survivers of the attack. He won’t be able to tell you much except that whatever attacked him and the other warriors was smart enough to set a trap. 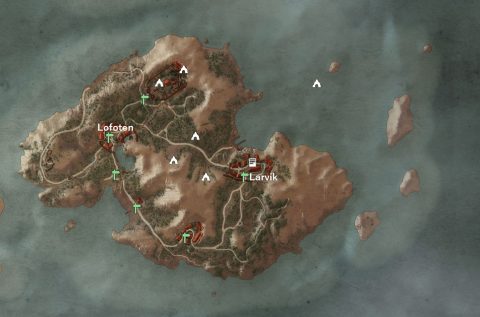 Make your out to the site of the ambush, halfway between Larvik and Lofoten and examine the area. You’ll find a cart and several bodies. Examine the body near the cart, the handle of the cart and the body on the other side of the road. Follow the tracks through the woods to a nearby cave.

Enter the cave and use Aard or Igni to get rid of the toxic gas. Take out the Nekkers along the way and you’ll eventually need to drop down to a Nekker Nest. This will draw out the leader, Hagubman.

After fighting Hagubman for a little while he’ll burrow into the ground and another group of Nekkers will appear. Try to kill him quickly so you don’t have to deal with too many groups of Nekkers.

Once Hagubman and the Nekkers have been dealt with loot the body for the Nekker Warrior Trophy and a steel sword called Devine. Return to Thorleif for your reward of 390 Crowns.