Once you’ve completed Possession and The Lord of Undvik head to the Kaer Trolde keep and approach the portcullis. It will open when you get near to it. Follow Arnvald into the feast hall.

If you wish to participate in the fist fights you can take on the sturdy Vildkaarl brothers. If you win Hjalmar will give you his Steel Sword. If you lose you’ll have to give up your sword or pay 350 Crowns.

Talk to Crach an Craite and he’ll give you a silver sword called Fate. During a cutscene three bears will attacked. They are cursed beings called Berserkers so use your silver sword to defeat them. 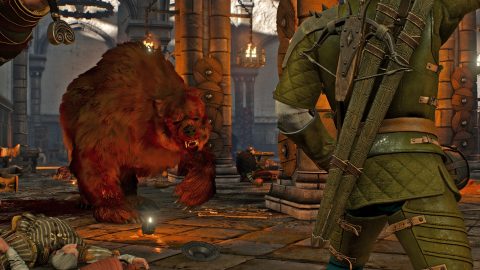 Both Cerys and Hjalmar will have a plan to deal with whoever orchestrated the attack on the king. Whoever you side with in this quest will be the one chosen to rule Skellige. If you stay out of it Svanrige, leader of Clan Tuirseach, will become king.

Use your Witcher senses to search the dining hall. Examine the remains of the Berserkers to find out they’re half-human half-bear. Geralt will notice the mead they drink smells odd. Examine one of the containers to find some strange mushrooms. Follow the scent to a horn that contained both the mead and mushrooms.

At this point Geralt will start talking with Cerys. She confirms that the Berserkers where also human. She suggests talking to Hjort who should be able to identify the mushrooms. Speak to him to find out the mushrooms are called Mardroeme and are rumored to be able to turn people into animals.

The mead must have been spiked. Head down to the wine cellar to investigate. Use your Witcher senses to pick out the right barrel. While you’re investigating someone will set fire to the Mahakaman Spirit and attempt to kill you. Use Aard to move the barrels out of the way so you can get to the secret exit. Make your way out through the tunnel to a Quen Place of Power.

Go back with Cerys to the castle and then down to the entrance to the wine cellar. Start looking around for clues and Geralt will find that someone stepped on a broken bottle of mead. Follow the trail to a piece of thread. It belongs to Arnvald. When you approach him he tries to get away on a horse. Chase after him and strike him down with your sword.

If you let Arnvald get away you still need to track him down but you’ll only find his corpse. If that’s the case you’ll need to come back to the castle and search his room.

Cerys will realize that the mastermind behind the plan was Birna Bran. If you stopped Arnvald before he was killed he’ll give you a Letter supposedly from Birna.

When the group gather around to investigate it will be claimed the evidence isn’t strong enough to convict Birna Bran of such a crime. Her son, Svanrige Tuirseach, will step in and ask why Birna asked him to leave before the chaos began. She then admits her crime and is sentenced to death.

When you go to the Coronation later on Cerys will be crowned Queen of Skellige.

Hjalmar’s plan is a little wreckless and not that well thought out. While searching the dining room Hjalmar will point out a body. Search it to find an item related to the God Svalblod. This is a forbidden worship that demands human sacrifices.

Geralt will pick up a scent so follow the trail to a body. Follow the blood stains and then footprints to a new trail. Follow the new trail to a house. Go inside and open the hatch in the floor.

Inside you’ll find a man named Hallgrim who after a short conversation will attack. Once you’ve injured him he’ll turn into a bear and continue to fight. Once you’ve killed him continue down the tunnel until you find a Druid named Artis. He won’t tell you who’s responsible for the attacks but once you’ve killed him you’ll find a Letter indicating that he is helping them in order to be named the new King’s advisor.

While helping Hjalmar doesn’t lead you to the actual culprit it does exonerate the an Craite family from dishonor. At the Coronation later on Hjalmar will be crowned King.