On a hill east of Harviken on Faroe you’ll find a lady fighting and knocking out her opponent. Approach her to find out she’s known as Jutta an Dimun and claims no one can defeat her. 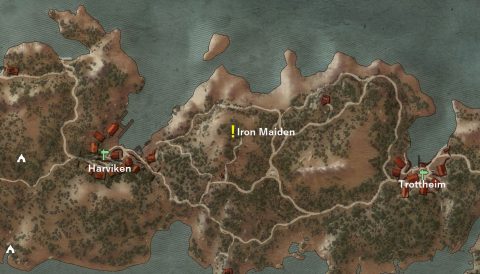 You can challenge her to a fight but she won’t fight just anybody. You’ll need to prove yourself first. She’ll randomly give you one of five tasks to complete. If you’ve already performed the task she’ll declare you worthy.

The tasks she might give you are: defeat Gundar in Harviken, defeat Einar in Harviken, kill the slavers in Trottheim, recover the Horned Hoskuld’s Sword or defeat Olaf (Fists of Fury: Skellige).

Once you’ve completed the task talk to Jutta again and she’ll accept you as her opponent. When the fight begins remember to keep it a clean fight. Meaning no signs, crossbows, bombs or potions. If you do she’ll claim your a cheater and the quest will fail.

Once you take her health down to about one quarter she’ll yield and ask you where you learned to fight. She’ll also invite you to meet her at her place after dusk.

After dusk make your way to Jutta’s house and she’ll be waiting for you. She tells you about her vow to only marry the man who could best her in a fight. Geralt is not planning anything long term but you can spend the night together. This has no consequences for romancing Triss or Yennefer.