Upon arriving in Kaer Trolde Harbor you’ll notice fist fights taking place outside the Inn. Your first opponent here is Valgard. Before fighting he’ll take you aside and ask you to let him win so he can impress his lady. If you lose the fight on purpose you’ll have another chance to defeat him.

The next two opponents are Grim in Arinbjorn and Einar in Harviken. After defeating your first opponent you’ll be given the Diagram: The Digger. There’s nothing for the second opponent and then the Diagram: Nilfgaardian Guardsman Armor for the third opponent.

Once you’ve defeated the three fighters you’ll have the opportunity to face the Skellige champion. Go to the arena to the northeast of Urialla Harbor and tell the Bookie you’re ready to fight. 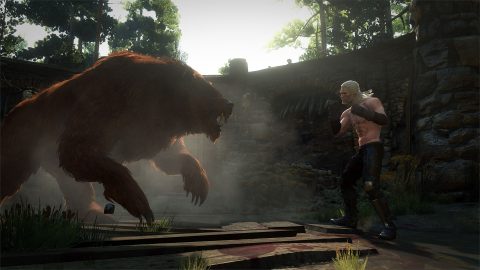 Your opponent, Olaf the Bear, will appear. You have no weapons so you’ll need to use your fists. Once you win you’ll be given a steel sword called Gwestog.