Of Swords and Dumplings

Speak to the armorers and blacksmiths around the place and ask them if they know a master swordsmith. They’ll point you to a man named Hattori in Novigrad. This quest can also be initiated by visiting his Dumpling Shop and talking to Hattori. 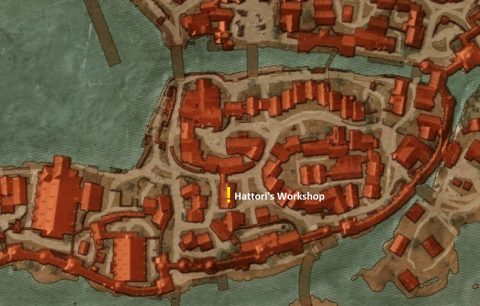 Hattori will be surprised to see a Witcher and will offer you some Dumplings. You have something much better in mind so ask him about being a blacksmith. He’ll tell you the story of how he was squeezed out of business by Ernst van Hoorna and Cleaver’s gang. If you want to help Hattori get back into making swords you’ll need to negotiate a deal for supplies with the King of Beggars.

Meet Hattori after 8pm at the docks and you’ll meet with Tinboy, the negotiator for the King of Beggars. He wants to take 50% of Hattori’s profits. You can say “Let’s negotiate”, or “Tell him he’s crazy” to negotiate down to 25% at the lowest.

As soon as you’ve made the deal Cleaver’s men will appear and Hattori will run away. Kill Cleaver’s men and follow Hattori’s trail back to his house.

Hattori will refuse to continue with the business until he has a bodyguard. He suggests you talk to a Skellige pirate known as Sukrus.

Go to the ship off the main docks and use Axii during the conversation with the brother-in-law to convince him to pay off his debts. If you don’t use persuasion than you’ll need to use Aard to destroy the mead barrels and then fight off his men before he’ll agree to pay back Sukrus. Either way head back to Sukrus and let him know you’ve reached a deal.

Now that Hattori has a bodyguard he’s happy to get back to work but he doesn’t have the supplies he needs. He suggests “borrowing” some from his competitor.

Make your way to the warehouse after dark and talk to the Dwarf who’s standing guard out the front. He’ll recognize you as a friend of Yarpen so he’ll let you in if you pay 200 Crowns or use Axii on him.

Interact with the door to unlock it and then go inside. Use your Witcher senses to locate the 3 Crates. Geralt will mark them so Sukrus and his men can grab them.

When you step outside Ernst van Hoorn will be there with his men, as well as Sukrus’ brother-in-law. The brother will side with you and a fight will break out. Kill off all of van Hoorn’s bandits and then return to Hattori. He can now work in peace and is available as a Master Swordsmith to trade and craft items.

Hattori will tell you to come back in a few days once he’s had time to craft something for you. Return to him and he’ll give you the Blade from the Bits as thanks for helping him out.