Over in Farcorners, outside the city gates and near to the eastern bridge to the Seven Cats Inn you’ll come across the dwarf Rostan Muggs. He tells you that he was attacked and the thief ran off with some of his documents. 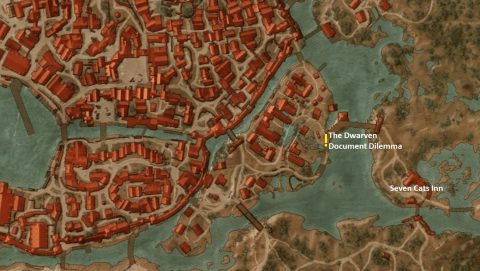 Head across the bridge and use your Witcher senses to pick up the trail. Follow it all the way to a man, Gerd, sitting outside the Inn. Talk to him to find out he won the documents fair and square in a game of Gwent.

You can either demand the documents back and start a fistfight, beat him in a game of Gwent, use Axii or attempt to buy them. Gerd will refuse to sell the documents so you’ll need to try one of the other three options.

Head back to Muggs to confront him about his story. He’ll confess that he lost the documents in a game of Gwent but he needs them back because they belong to his boss. Once you have the Documents return them to Muggs for a small reward of 20 Crowns.